On his tombstone will be engraved three words: respect, tenacity, and compassion.[1]

Lord Grayson Shadowbreaker is a human paladin and paladin trainer known to be one of the foremost human paladins of the Alliance.[2]

He is the chief paladin in Stormwind and a knight of the Silver Hand. He can be found in the eastern wing of the Cathedral of Light in Stormwind, in a room adjacent to the main entrance, alongside fellow paladin trainers Katherine the Pure and Arthur the Faithful. During the third invasion of the Burning Legion, he is located in the Sanctum of Light as the Mission Specialist of the Order of the Silver Hand. 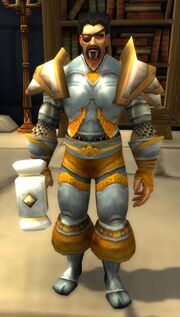 Grayson Shadowbreaker in World of Warcraft.

Lord Grayson Shadowbreaker is present at the Cathedral of Light where he met new promising paladins and sends them on missions to Chillwind Camp in the Western Plaguelands, to assist Commander Ashlam Valorfist against the endless undead of the Scourge present in the region.[3]

When the time comes for a paladin to obtain his charger, they are redirected towards Lord Shadowbreaker to be guided through the many trials that will follow, and to test if they are worthy.[4]

At first, he sent the paladin adventurer to meet High Priest Rohan and get his

[Exorcism Censer] by sacrificing a large amount of gold to support their cause in Ironforge, and help the poorest among the dwarf people.[5] Subsequently, he sent them with the censer to drive out the evil spirits that tormented Terrordale, in the Eastern Plaguelands, in order to judge them with the Light.[6]

Now in possession of the exorcism censer, and after having proven themselves with it, Grayson explained to the paladin adventurer that a charger is nothing without proper barding for it, and that it is necessary that the barding was created from the best possible materials and be sufficiently in harmony with the spirit realm. So he sent them to Grimand Elmore, who made him his first barding when he went for his own charger,[7] so that they can bring him the materials to creating their

For the next step, the master paladin sent them to Dire Maul in Feralas, in order to eliminate the corrupt treant Tendris Warpwood and save the Ancient Equine Spirit, to then feed him with

[Manna-Enriched Horse Feed], created and provided by Merideth Carlson at Southshore,[10] and get its special blessing on the barding.[11]

For the last step, he ordered the paladin adventurer to obtain two diamonds and assemble them with the censer to create a

[Divination Scryer].[12] Then he sent them in the depths of the Great Ossuary of Scholomance to fight the Death Knight Darkreaver, saving its charger from the torment of its servitude by holding the

[Charger's Redeemed Soul] and the

[Blessed Arcanite Barding], which bound it as the charger of the paladin.[13]

Grayson took part in a grand ceremony for the fallen Alliance members who died in Northrend, where two night elf Sentinels arrived to tell King Varian Wrynn what had happened to their fellow night elves in Ashenvale. At the request of the King, the paladin went to get food and drink for the women, an attitude described by Jaina Proudmoore as that of a paladin for whom any service, as modest as it is, was born from the Light as long as it helped others.[14]

Following the Cataclysm, Lord Grayson Shadowbreaker still takes care of sending promising paladins on missions,[15][16] more particularly to allow them to obtain unique materials that can only be found in the cursed Shadowfang Keep in Silverpine Forest, so that Therum Deepforge can create weapons at the height of their dedication for them.[17] He also takes care of sending them to fight the enemies of the Alliance in Blackrock Depths, and prevent the deaths of allies at the hands of the Dark Iron clan and the Twilight Hammer.[18]

Following the death of Tirion Fordring during the Battle for Broken Shore, Grayson Shadowbreaker moves to the Sanctum of Light to serve the new Highlord of the Silver Hand. There he volunteered to serve as a mission specialist, next to the paladin Scouting Map, to help coordinate their forces on the Broken Isles and strike back against the Legion, by advising the Highlord on various missions during the third invasion of the Burning Legion.[19]

Following the discovering of the

[Light's Heart], that crashed towards the coast of Suramar, and listening to the message of the High Exarch Turalyon to save Azeroth by bringing the heart of the naaru Xe'ra to the Prophet Velen, Lord Grayson Shadowbreaker organized a meeting of the Silver Hand, bringing together all the leaders of the Order, to discuss their goals and next actions against the Legion.[20]

After the Order's victory over Balnazzar, he sent Champion Cyssa Dawnrose to contact the Highlord to join him in the Sanctum of Light. There he explained that he wanted the leader of the Silver Hand to have a new mount suited to his status, as he did for young paladins, but times have changed as they now have most of those materials at hand. He just asked to the Highlord a strong, thick, and heavy barding,[21] before redirecting them to Alard Schmied in Dalaran who is able to modify the barding to make it worthy for the steed who will bear it.[22]

Now in possession of the

[Plated Barding], Grayson Shadowbreaker announced to the Highlord that it was time to purify the barding, with both material and immaterial means, and that it was necessary to in Stratholme to recover

[Stratholme Holy Water], in order to overcome the will of Rivendare's mount, Shadowmane.

He waited for the Highlord inside Alonsus Chapel, now at the hands of the Order of the Silver Hand, where he announced that he had made preparations for the ritual but that three of his best men did not return after being sent to secure the holy water. He asked the Highlord to take two paladins to be assisted in the city, then to find the missing paladins and the holy water necessary for the ritual. When they returned, he thanked the Highlord for saving his men and instructed them to proceed to channel the holy magic in the barding, before taking them to Rivendare's crypt to confront his specter.

In the Slaughter House, he discovered that the tomb had been desecrated and the body of Lord Aurius Rivendare had been taken away. He fought then alongside the Highlord against Raemien the Soultaker who attacked them while announcing that he would unleash the plague again on the Plaguelands. Following their victory, Grayson took Shadowmane to the Sanctum of Light with the help of the Silver Hand paladins, so that the mount can be redeemed into Glowing Reins of the Golden Charger and claimed by the Highlord.[23]

The subject of this section was removed from World of Warcraft in patch 9.0.1. 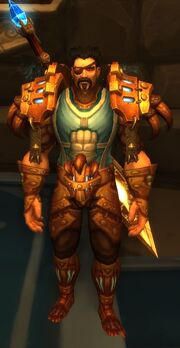 Grayson Shadowbreaker in Sanctum of Light.

May the Light protect you this day.

Should you ever need my assistance, you know where to find me.

Your will is our command.