Lord Hiram Creed was the name used by the black drakonid Creed while in disguise as an affluent Gilnean noble. Creed manipulated a group of Gilnean humans and worgen named the Blackhowl who occupied Gilneas City, and secretly infected them with his own draconic blood, which made them stronger but also unwittingly slowly turned them into his unwilling servants. The Blackhowl had apparently repelled numerous Forsaken assaults, as seen in the courtyard of the Stoneward Prison where Creed resided, which was littered with Forsaken corpses.

Black Prince Wrathion sent his rogue champion who sought to earn his favor to assassinate Creed in his crusade to eliminate all corrupted black dragons on Azeroth.[1] With his death, it is unknown what the fate of the Blackhowl group is. 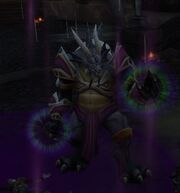 Hiram Creed in his drakonid form

Aggro
Lord Hiram Creed says: An assassin, eh? Who sent you? Speak, or I will carve the answer from your skull!

75% Health
Lord Hiram Creed says: I tire of this disguise. Now we finish this!

Wrathion and his followers claimed that the Gilneans had no clue of their subversion, so at the time they might've been fighting for the Alliance. However Creed later turned them all into his loyal servants with his draconic blood, and they were also hostile to Alliance rogues sent to kill Creed. Creed also fought the Forsaken within Gilneas. It thus seems that Creed sought to take Gilneas for himself or his flight, turning its inhabitants into his unwilling servants.