Not to be confused with Salanar the Horseman.

Lord Solanar Bloodwrath is a sin'dorei Blood Knight, and Lady Liadrin's second-in-command.[1] He is a level 70 quest giver found in the Hall of Blood of Silvermoon City, standing in the room formerly inhabited by M'uru. 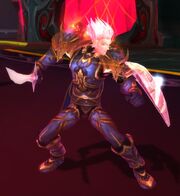 Solanar in the Third War.

Solanar gained renown during the Third War, in which he and his older brother Falon fought against the Scourge on the Isle of Quel'Danas. He was personally responsible for securing King Anasterian Sunstrider's body after the elven monarch was slain by Arthas Menethil, to save him the fate of undeath. With the king's body in tow, Solanar and Falon arrived at the reclaimed Bazaar in Silvermoon City after the Scourge's main force had left Quel'Thalas. The brothers helped keep the peace in light of the elves' damning circumstances and volunteered to aid Prince Kael'thas Sunstrider's mission to destroy the tainted Sunwell.

The brothers had agreed that Falon would defend Rommath during the magisters' ritual, while Solanar would hold off any Scourge or Amani who would attempt to disrupt Rommath's spellcasting. However, they swapped roles at the last moment - Falon, as the elder brother, believed it was his place to face the greater danger - and Falon met the invaders head-on. He was killed in the ensuing battle, leaving Solanar as the surviving sibling. Lor'themar Theron consoled Solanar for his loss, promising not to let his brother's sacrifice be in vain. He was moved by the prince's proclamation regarding their fallen people and the new identity the elves would embrace: the blood elves.

Solanar changed his surname as a further homage to his fallen brother. He chose the name Bloodwrath.[2]

Solanar was one of the first to join the Blood Knight Order. He took part in the knights' reclamation of Sunsail Anchorage, impressing Lady Liadrin with his prowess and feats of strength. He was made acting commander of the knights' vigil at Dawnstar Spire and led the knights in an ambush against Dar'Khan Drathir in the hopes of capturing information regarding the Scourge's plans for the region. Drathir had predicted their presence and turned the battle around, though Solanar and his knights were relieved by the arrival of Lor'themar and Halduron Brightwing. Solanar, along with the other knights, healed the regent lord after he was caught ablaze by Dar'Khan's magics.[2]

After the betrayal of Kael'thas to the Burning Legion, the prince led a brief attack on Silvermoon to spirit away M'uru to the Sunwell. Lady Liadrin traveled to Shattrath City in order to secure a new source of power for the order, leaving Solanar to take her place in Silvermoon. As Liadrin's second-in-command, Solanar took over the duties of training aspiring Blood Knight Masters in her stead.

He joined the Silver Hand and is located in the Sanctum of Light, under Light's Hope Chapel.

He may be related to Champion Bloodwrath, though given "Bloodwrath" is a name Solanar fashioned for himself, it may be coincidental.