Lordaeron is the northernmost continent[n 1] of the Eastern Kingdoms. It was named after Lordain, a general of Arathor who sacrificed himself in the Troll Wars.[1] Separated from Khaz Modan by a narrow strait, the continent of Lordaeron stretches from the Arathi Highlands in the south to the Eversong Woods in the far north. Historically, the continent has been populated by humans in the northern, western and southern regions, trolls in the eastern regions; the Hinterlands and Zul'Aman and high elves in the far-northern Quel'Thalas. After the recent events of the Third War and the War against the Lich King, however, the vast majority of the human population has turned undead, and the high elves are now mostly known as blood elves. The climate of Lordaeron is moderate, although the land is rugged and largely mountainous in and around the Hinterlands, Alterac and Arathi Highlands. The southern, northern and western regions of Hillsbrad, Gilneas and Tirisfal are characterized by mild forests and farmlands whereas the north-eastern region of Zul'Aman is covered by a thick and wild forest.

The territories of Lordaeron have seen major power shifts as of the Cataclysm.

Employing the Val'kyr to raise a mighty army, the Forsaken have begun a bold campaign to secure their hold over Lordaeron. By orders of the new Warchief of the Horde, Garrosh Hellscream, the Forsaken mobilize and move into Gilneas to secure a port for the Horde in southern Lordaeron. The Forsaken have conquered much of Silverpine Forest, and have been battering the Greymane Wall with their siege weapons. The Forsaken soon aligned themselves with Ralaar Fangfire and his Gilnean Wolfcult and helped him infiltrate Gilneas so that he could spread the worgen curse and sow civil discord in Gilneas. The Cataclysm then caused the Greymane Wall and many of the nation's defenses to fall, allowing the Forsaken to invade freely. The Gilneans, now transformed into worgen, attempt to fight off the invaders as best they can. Eventually, the night elves arrive in Gilneas, bringing both vital military aid and the truth behind the worgen curse. Likewise, orcs reinforce the Forsaken forces, causing an escalation into an all-out battle between the Alliance and the Horde in the region. The Forsaken, against the orders of the Warchief to cease production, unleash their devastating Forsaken Blight against Gilneas. Many of the survivors flee across the sea to Teldrassil, where the night elves grant them sanctuary.

All that is left of Hillsbrad Fields.

The Forsaken forces later march onto the town of Southshore and completely annihilated all life with in the region by deploying the New Plague. Magistrate Henry Maleb led the ones who managed to escape Southshore and fled to the town of Hillsbrad Fields. The Ruins of Southshore is left inhospitable and will be so for several decades. The ramifications of the Forsaken Blight forced the high echelons of the Horde to reconsider the free use of such a potent weapon. Instead, the Horde has issued a diluted version of the Forsaken Blight for the Forsaken to use. The town of Hillsbrad Fields was later finally destroyed by the Forsaken, concluding the Hillsbrad campaign initiated by Varimathras years ago. Magistrate Henry Maleb led the Hillsbrad Refugees to Fenris Keep, where they have been taking refuge. A few Hillsbrad residents and Magistrate Burnside stayed behind and led a resistance but were eventually defeated and imprisoned by the Forsaken war machine; others remained in the Azurelode Mine, where after an attack by the Forsaken's domesticated spiders, they too were captured and are being shipped off for experimentation. Those who stayed to defend Hillsbrad eventually became prisoners in what is now known as the Sludge Fields, a Forsaken death camp where the mad Warden Stillwater cruelly experiments on his prisoners and even fellow Forsaken. When the other Forsaken discover this, he is punished for his crimes against his own people, yet not for his misdeeds upon humans.[2]

Even with Gilneas falling into the hands of the Forsaken, the fighting between the Gilnean worgen and the Forsaken continues. Bloodfang worgen who had recently allied themselves with the Gilneas Liberation Front, destroyed three Orc gunships that had arrived. The ships were full of supplies, weapons and soldiers.[3] Later, the Forsaken kill some of the Hillsbrad refugees on Fenris Isle and resurrected them, bolstering Forsaken forces and somewhat making up for the loss of the three orc gunships.[4] However, after this attack, many of the Hillsbrad refugees decide to take the Worgen curse offered by Darius, rather than be resurrected as Forsaken. Later, the Forsaken discovered that lord Darius Crowley and Ivar Bloodfang are having a meeting in Deep Elem Mine, and Sylvanas sent a squadron of elite Veteran Forsaken Troopers under the leadership of Master Forteski to trap and slay the worgen leaders. However, the Forsaken soon discovered that instead of trapping an enemy, they were trapped themselves. As a result, the whole squadron of elite Forsaken Troopers was destroyed.

A convoy of Veteran Forsaken Troopers and Forsaken catapults were ambushed by the Bloodfang pack while attempting to cross Olsen's Farthing in Silverpine Forest. The ambush resulted in all those Forsaken troopers being killed and the destruction of the Forsaken catapults.[5] Warlord Torok sent Sea Dogs to fight the Hillsbrad worgen that were swimming to the Decrepit Fields from Fenris Isle. The Sea Dogs attacked the Hillsbrad worgen but were eventually defeated after killing many worgen.

A Worgen Rebel and Forsaken Vanguard in combat.

Meanwhile, 7th Legion reinforcements from Stormwind, sneaked their way into Gilneas and aided the Gilneas Liberation Front in retaking Gilneas City. Together, the Alliance forces were able to neutralize Rutsak's Guard, Dreadwatch Outpost, and Forsaken Forward Command. The Forsaken forces eventually had to fall back to Silverpine Forest but not before recovering the corpses of Lord Godfrey and the Gilnean traitors, whom they raised to undeath as Forsaken allies. The Gilneas Liberation Front continued to harass Forsaken forces in Silverpine while the 7th Legion retook Pyrewood Village.[6][7] Druids in the Gilneas Liberation Front used their bear form in guerilla warfare against Horde forces at the Forsaken Front, which resulted in the loss of a few Horde battalions. Eventually, the Horde forces learn of this tactic, and it becomes ineffective after counter-measures are implemented.[8]

Eventually, the tide turned. The worgen and their Alliance allies were driven back. The town of Ambermill was conquered by Forsaken forces and its inhabitants converted to Forsaken. Another town, Pyrewood Village, was burned to the ground and the Alliance's battle plans were stolen thanks to Lord Godfrey's guidance. In a final push, Alliance and Gilnean forces met the Forsaken army on the Battlefront for one final battle. The Forsaken emerged victorious as the Gilneas Liberation Front was coerced to retreat back into Gilneas after Sylvanas kidnapped Lorna Crowley, and blackmailed Darius Crowley with threats to raise Lorna as an undead slave. The celebration was short-lived though as Lord Godfrey and his allies unexpectedly betrayed the Horde and assassinated Sylvanas. When Sylvanas was brought back to life, she remains determined to get her revenge on Godfrey and the Alliance and the Alliance's push on Silverpine was stemmed.

Sylvanas' leading the invasion into the area was halted by Godfrey's betrayal; ironically securing the area for the Alliance, who at this point were mostly composed of Gilneans that he had betrayed. Following the events prior to the final battle, all Forsaken land basses in Gilneas were either retaken or destroyed. Currently, the only assaults by the Horde are by sea, as they are attempting to re-establish a land base in Gilneas to once again begin a proper invasion. The invasion by sea, which is ongoing, has met an issue as the Gilnean forces have been heavily reinforced by the Alliance, currently the Horde has been unable to properly re-establish a land base on the coast, as the Alliance has met them to deter or repel these attempts.

Following the events at Silverpine Forest, the Bloodfang pack have since been fighting a guerrilla war with the Forsaken forces at Hillsbrad. They are later found allying with the Stormpike Guard and have been amassing their forces at Purgation Isle. Due to the efforts of Kingslayer Orkus and Horde adventurers, their plans to launch an all-out attack were uncovered. High Warlord Cromush asked for reinforcements from the Frostwolf clan, but were denied by Drek'Thar, who despises the Forsaken's way to make war. Cromush panics at the Frostwolf clan's abandonment but later composes himself and sends Horde adventurers to blow up the Alliance vanguard forces before their offensive on Hillsbrad could begin.

Forsaken forces are later found establishing Galen's Fall for their impending invasion on the nation of Stromgarde in their plan to conquer all of Lordaeron. To aid them in their efforts, they have raised into undeath the fallen prince of Stromgarde, Galen Trollbane. He aids Horde adventurers in taking the legendary sword, Trol'kalar, so that the Forsaken may use it as a weapon against the Alliance. Forsaken forces have since tried to invade the Hinterlands and launched an all-out assault on the Highvale elves of Quel'Danil Lodge. The combined Alliance forces were able to drive back the Forsaken assault and retain their hold over Quel'Danil Lodge.[9]

With the weakening of the Scourge after the war against the Lich King, the Alliance forces led by Thassarian have claimed the western part of Andorhal, and the Forsaken forces led by Koltira Deathweaver have claimed the eastern part of the city. The two factions are currently fighting each other for control of the whole city.[10] During the Battle for Andorhal, the Forsaken, their ranks bolstered by the use of the val'kyr to raise their slain foes, push the Alliance out of the city and conquer Andorhal.

Following the Burning of Teldrassil, the Alliance retaliated with a massive assault on the Forsaken capital of Undercity in an attempt to retake the former human kingdom. The Battle for Lordaeron ended with Sylvanas releasing the blight and rendering the Capital City uninhabitable, but weakening the Forsaken's control over the region considerably. Lordaeron was apparently militarily occupied by the Alliance afterwards.[11]

The Fourth War drastically reshaped the balance of power in the Eastern Kingdoms, and in Lordaeron in particular, with the Alliance waging an active campaign against the remaining Forsaken settlements throughout the conflict. The Fourth War eventually ended in an uneasy armistice, and the Alliance successfully reclaimed Southshore and Shadowfang Keep from the Forsaken, strengthening their presence considerably in Hillsbrad Foothills and Silverpine Forest. The Alliance also triumphed in the Battle for Stromgarde, apparently returning most of the Arathi Highlands back into the Kingdom of Stromgarde's sovereign control, under Danath Trollbane. Tirisfal Glades remain under Forsaken control, although Lordaeron Keep itself remains blighted, the blight is apparently slowly receding, but it will take a long time for its lingering effects to disperse completely.[12] 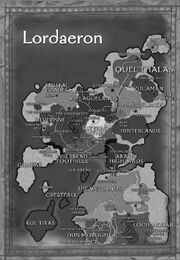 Map of Lordaeron in the Game Manual.