Lorna Crowley is the daughter of Lord Darius Crowley, one of the principal leaders during the Northgate Rebellion. After the retaking of Gilneas City, she joined her father as commander of the Gilneas Liberation Front. When the Burning Legion returned to assault Azeroth, Lorna and Darius joined Genn Greymane on the Skyfire as part of his army forces. 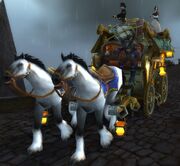 The day of the worgen attack on Gilneas City, Lorna saved a worgen adventurer by shooting Josiah Avery. The two of them worked together to get the Northgate rebels' hidden arsenal for Greymane's army.

Shortly after, she met with King Genn and Prince Liam after her father chose to stay behind in the Light's Dawn Cathedral and make a last stand against the worgen. She had received word her father was free, but Liam told her about the choice Darius made. Lorna pulled out her gun and took aim at Genn, cursing at him and believing this was his idea of revenge after the Northgate Rebellion. Liam restrained her, and a hysterical Lorna demanded she be let go to die with her father before she began to cry in Liam's arms. Afterward she returned to the Crowley Orchard and lived as a hermit. Before being evacuated, she and the worgen adventurer worked together to rescue some horses. She then moved to the Greymane Manor and from there she took a carriage with Gwen Armstead to Stormglen where she found a diary of Bradshaw and learned that the man ventured into Blackwald. She sent him there only to find the night elf Belysra Starbreeze along with other worgen. Darius was revealed to have had survived and become a worgen. He was worried how Lorna would respond to his curse, but she was fine with it.

She was then sent to Livery Outpost to rescue the villagers from northern Gilneas and free Emberstone Village. Lorna then aided the Worgen adventurers in retaking Gilneas City after the first assault of the Forsaken. After the death of Liam, she learned that the Forsaken were going to use the plague on the city. She was present at Liam's funeral in Aderic's Repose. After that she moved to Keel Harbor and loaded explosives onto an Orc Gunship and used it as a ram to destroy the Forsaken forward camp next to the Greymane Wall.

Following the invasion of Gilneas, Lorna joined her father as commander of the Gilneas Liberation Front and fought with the Alliance to retake the Ruins of Gilneas from the Forsaken. She attacked the Forsaken Forward Command as she used

[Forsaken Communication Device] to declare that the Alliance once again controlled Gilneas and their forces would soon arrive to kill those that would not surrender.[1] However, while stationed in Silverpine Forest she was captured by the now-Forsaken Lord Godfrey. Lorna served as the bargaining chip in the surrender of the Gilneas Liberation Front as Sylvanas gave Darius two choices; surrender or have Lorna turned into a member of the Forsaken. Darius, unwilling to allow such a fate to befall his daughter, agreed to the surrender, and Sylvanas allowed them to retreat towards the still contested territory of Gilneas.[2]

Commander Lorna aboard the Skyfire.

Following the Battle for the Broken Shore, Lorna and her father Darius joined Genn Greymane on the Skyfire. Lorna and Princess Tess escorted the adventurer to the Stormwind Keep, conversing on the way. When flying to Stormwind Keep, Princess Tess Greymane confided to Lorna her concern about the lust for vengeance consuming her father. Lorna states that all Gilneans suffer from that rage, her father more than most. Though Tess concurs with Lorna, she fears more deaths are sure to come. Lorna grimly replies that such is the cost of vengeance and that Gilneas has waited for it long enough. When arriving at Stormwind Keep, Tess tells the adventurer to give King Anduin their condolences for the death of his father Varian Wrynn. The two quickly return to the gunship once the player lands, as they are needed back at the ship.[3]

The Gilneas Brigade led by Lorna and her father Darius established Greywatch to secure Stormheim from threats.

During the Skyfire's assault on Sylvanas Windrunner's fleet, Lorna led the Alliance boarding party in scouring Windrunner's ships in their search for the Banshee Queen. After discovering that Sylvanas traveled to Stormheim ahead of the fleet and that the Horde was planning on infiltrating the Skyfire, Lorna and her soldiers went back to the Skyfire to defend the ship. Unfortunately, the Horde succeded in setting fire to the Skyfire's ammunition and its explosions caused the Skyfire to crash and burn on Stormheim. Though the crew of the Skyfire was able to evacuate before the crash, the gunship was utterly destroyed.

[Aegis of Aggramar]. Following a lead on Sylvanas, Lorna would scout Skold-Ashil on Greymane's orders to uncover what Sylvanas seeks there. Lorna discovers that Sylvanas means to undergo the rituals of ascension to be granted an audience with Eyir so that she could subjugate her and create more Val'kyr. Lorna sends news of her findings to Genn so that he could confront Sylvanas personally and undermine her plot. Greymane succeeded in freeing Eyir and Lorna recovers a poisoned Genn and treats him back at Greywatch.

Lorna was present at the war council in Stormwind Keep.[4] She later participated in the Battle for Darkshore.

Lorna followed her king when they were tasked into assaulting Orgrimmar's western gate while Anduin Wrynn and Varok Saurfang's forces assaulted the main gates. Due to the mak'gora between Sylvanas Windrunner and Saurfang, they did not assault the city.

Lorna was present in Bashal'Aran and witnessed Tyrande's speech about the Horde's defeat in Darkshore.[5]

Sylvanas will pay for her crimes...

We should focus on making contact with the fleet and getting to a fortified position.

Bind at this location.

Once we're able to breach this wall, we should be able to cut right through to the mountain path.

Well that's just great. Just when you think you're done with these vrykul, a bigger, meaner one blows up your bridge.

There's got to be another way up...

When our people needed a home, the night elves were there to take us in. We will not stand by as they fight to retake their own home. We fight with them!

Lorna in Curse of the Worgen.
Gilneas

I heeded your advice from last week to board up my windows and buy a reinforced door. None too soon, either: the Starlight Slasher struck a household not two blocks from my own last night. I inquired with the authorities at the scene about what they're doing to reign in the murder spree, but they didn't even grant me a second glance, waving me off with the usual "Stay off the streets and lock your door!" I know most of them don't trust me, but they're not proving to be trustworthy themselves, either.

Well, I'm not one to sit around, waiting to get dragged off in the middle of the night! I've started training the mastiff pups I bought from Rupert on a lark last month to track a scent, and they've taken to it quite well. They'll make fine hunting and guard dogs soon, so I'll be happy to pass on off to you once they're able to track a scent decently: they're right pleasant company, it'll help your young ones sleep better. That's at least a month off, though, so just consider the offer for now.

Which brings me to the reason for this letter: the attached package is a blunderbuss, so be sure to unwrap it at home and keep it somewhere hidden, but accessible. I threw some spare powder and buckshot in there too - no, no need to thank me. You helped my father when he was in a rough spot, and Crowleys never forget kindness freely given. Take the gun and keep safe. I fear things are going to get worse before they get better.

Lorna could be related to other people called Crowley besides her father Darius.