Lost Peak is the gigantic volcano at the center of the Lost Isles. The main path into the volcanic mountain lies on the western side[51.6, 47.0] 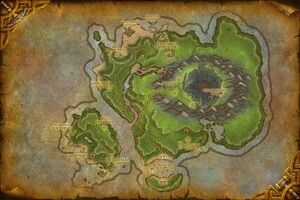 of the main island, though there is also a tunnel entrance from Oomlot Village which cannot be accessed directly by the players. It has a massive caldera in which there is another smaller one. The fire turtle Volcanoth lived in its lair inside of the volcano. The goblins that got stranded on the Lost Isles built a mine on its northern foothills.

After Volcanoth's death, Lost Peak erupted destroying much of the Lost Isles.