Love is in the Air (original) 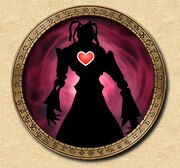 Who is behind this plague of passion?

In 2010, this event was significantly changed. This page covers the version of the event up to 2009. See Love is in the Air for the current version.

From the official site:

Something is in the air in the major cities of Azeroth. Some call it love, and some just call it friendship and admiration. Whichever it is, many guards and townsfolks now spend their days giving and receiving tokens and gifts to other amorous citizens.

The more skeptical, however, are suspicious of the strange "love sickness" clouding the hearts of so many. Will this widespread occurrence be simply taken as a recent outbreak of amore? Or will our brave adventurers find a sinister plot behind the source of this plague of passion? Only time will tell... 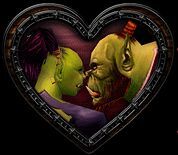 To start, talk to an Innkeeper with a heart (

) over their head and purchase

[Love Token], and either a

[Perfume Bottle] or a

[Cologne Bottle]. Immediately use either the perfume or cologne on yourself. This will provide a 60 minute Cologne/Perfume buff. Walk around any major city and you should see NPCs with hearts (

Interact with any one of them and you will be prompted (talk bubble) to give them a love token.

An NPC will not give out items after receiving a token for 1–2 minutes.

If your inventory is full and you talk to an NPC with a heart above their head and they accept your token, they will not give you something in return.

After giving a token, several things will happen:

If you do not currently have the debuff

Sometimes when you attempt to give a token to an NPC they will not give you an item in return and will instead give you the "Heartbroken" debuff. This debuff prevents you from giving tokens to any NPCs for 60 minutes. This happens randomly.

When you get a Pledge/Gift of Adoration, you cannot receive another until the Adored Buff fades. During that 60 minute period you will receive Pledges/Gifts of Friendship instead.

The Pledge/Gift of Adoration can contain a variety of items:

[Box of Chocolates]
Contains an assortment of six chocolates with a variety of powerful buffs:

Bag of Candies
Binds on pickup. Has 10 charges and a cooldown of 1 minute. When used, creates a

[Heart Candy] with the player character's name stamped on it. Heart Candies are based on the real world Valentine's Day chalky confection. Each one bears an expression of affection such as "I'm all yours!" or "I'll follow you around Azeroth." Their only purpose is to give to other players to get the Be Mine achievement.

[Handful of Rose Petals]
Causes rose petals to rain down around a player for a period of time. This is part of the world event achievements

[Fistful of Love] and

[Flirt With Disaster]. Not Soulbound.

[Love Rocket]
Shoots a heart-shaped firework into the air. 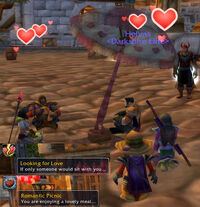 [Romantic Picnic Basket]
This item is permanent and has a 3 minute cooldown. Sets up a picnic basket with hearts on an umbrella. When one person alone clicks the basket, he will sit down and receive the buff "Looking for Love..." which is represented by the "broken heart" icon. When two or more people sit by it, they will receive a buff "Romantic Picnic - You are enjoying a lovely meal..." which is represented by the "romantic picnic basket" icon and all the players sitting will have floating hearts above their heads, randomly drink, eat, blow kisses, and laugh.

[Silver Shafted Arrow]
Shoot at a player character and the small pet version of Kwee Q. Peddlefeet will follow them around providing that player character doesn't already a have a pet. Can have up to 10 charges. Expires after 10 days in-game.

[Unbestowed Friendship Bracelet]
Use to cure Heartbroken debuff. The recipient gets a

[Friendship Bracelet] with no known purpose after curing the broken heart.

[Truesilver Shafted Arrow]
Summons a version of Kwee Q. Peddlefeet, a small pet that will follow you around.

[Target Dummy]. When dropped on the ground, nearby monsters will attack it. Lasts for 15 seconds. Not Soulbound. Expires after 10 days.

[Lovely Black Dress]
A "rare" chest piece that is not soulbound.

An NPC will give you a package after getting a token if you have the Adored Buff. What this contains highly depends on who you talk to.

It is not widely talked about, but during this time, a special item drops from four elites in a variety of old-world dungeons. [Bouquet of Red Roses] - This item acts the same as [Handful of Rose Petals], but has an unlimited number of shots. It randomly drops from Archivist Galford in Stratholme, Illyanna Ravenoak in Dire Maul, Lorekeeper Polkelt in Scholomance, and Princess Moira Bronzebeard in Blackrock Depths. As of 2009, it is no longer possible to get this item from these bosses [1].

During the 2009 event of "Love is in the Air", the [Bouquet of Ebon Roses] was introduced for those characters with access to Northrend. The [Bouquet of Ebon Roses] showers the character with black rose petals and drops from Prince Keleseth in Utgarde Keep, Maiden of Grief in Halls of Stone and Prince Taldaram in Ahn'kahet in both Normal and Heroic modes. Due to an issue not allowing the Ebon Roses to get the

[Fistful of Love] achievement as intended, there was a hotfix that replaced them with the [Bouquet of Red Roses] [2]. 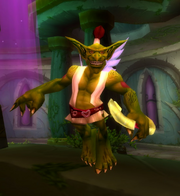 When you turn in an Alliance or Horde Gift Collection, Kwee Q. Peddlefeet will give you a [Box of Chocolates] and your choice of 5 [Handful of Rose Petals], 5 [Silver Shafted Arrow], or 5 [Love Rocket].

Your turning the collection in counts as one vote for the popularity of the leader of the faction of the city that you turn the collection in at. At the end of the the Love is in the Air seasonal event, the capital city leader with the most gift collections will have Kwee Q. Peddlefeet stay by them to buff players for another week.

You can ask Kwee Q. Peddlefeet about the gift voting standings. He gives the number of turn-ins for each participating city leader and the totals for each faction.

Disproportionate voting stacked toward one particular leader will give either faction that does so a better chance of winning.

Note: you will only be able to do one of these quests per character.

Note: Dearest Colara is the introduction to this quest. If you have it in your log, you can't get this one. However, if you start this chain before doing Dearest Colara, you will not be able to do that one.

Dangerous Love starts by the bank in Stormwind with Aristan Mottar. The first objective is to get a Stormwind Guard's Card. Then you must give a

[Perfume Bottle] and a

[Cologne Bottle] (purchasable at the inn) to Morgan Pestle. You will receive a box of chocolate and a handful of rosepetals for completing this step.

Upon talking to Aristan Mottar again, he will ask you to speak with Innkeeper Allison. Allison will tell you to talk to Evert Sorisam, a man in "The Finest Thread" in the Stormwind Canals. The Finest Thread is near Cathedral Square. He will lead you to Apothecary Staffron Lerent, who is behind Ravenholdt Manor in the Hillsbrad Foothills. Just in front of the manor you will see a practice ring, behind that is a path through the mountains. Go through that path and then to the left. You can sort of see on the map how this leads behind the manor.

After talking to him, he will offer you the contents of his cauldron, which is a choice of:

Note: You must right click on his cauldron and open it, otherwise you will not get your reward.

Note: Before you can do this, you must complete Dearest Elenia.

The short quest chains that start with Dangerous Love eventually lead to the discovery of who is behind the love plague. The end reward is a choice of:

[Fool For Love] can be completed during this time. In addition are the following achievements not required by the meta:

In 2007, Blizzard created a Burning Crusade commercial that featured the "Love is in the Air" event as well as the new jewelcrafting profession. From the official website, the ad was described as follows:[1]

What do you get the blood elf who has everything? This Valentine's Day, make it an epic jewel! Yes, the industrial empires of Azeroth aren't about to let anyone escape the relentless marketing campai- er, bloom of true love associated with this time of year! Take a look at this new commercial but be warned that you may be struck by a sudden impulse to spend all the gold you've saved for your epic mount.