Wowpedia
Register
Don't have an account?
Sign In
Advertisement
in: Shattrath City subzones, The Burning Crusade, Factions,
and 2 more
English

Not to be confused with Lower city (Stormwind).

The Lower City (or Lower Shattrath) is the gathering place for many of the refugees who fled from the war, including arakkoa, sporelings, and almost every other Outland race. It the home to a dozen different faiths and religions[1] and is also described as a coalition.[2]

The Lower City of Shattrath is the place where the refugees gather and help out in their own ways. When someone helps any of the mixture of races who fled from war, word gets around quickly. Their quartermaster, Nakodu, is located at the market in the Lower City. The Lower City of Shattrath also contains a very useful Mana Loom or an Alchemy Lab. Many NPCs have extensive knowledge of crafting. The Battlemasters for both sides of all four battlegrounds can also be found here, as well as the World's End Tavern.

It also has a large number of useful NPCs and items: 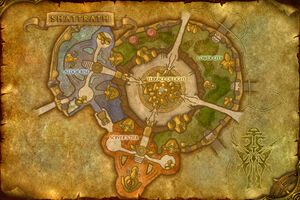 Note: Quest chains are listed under the sub-zone they start in.