Lynore Windstryke is a night elven rogue and a commander in the 7th Legion. She was one of the leaders of the Might of Kalimdor until it was disbanded. 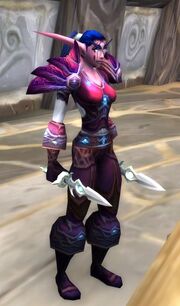 As High Commander, Lynore Windstryke led the night elves of the Might of Kalimdor - the army raised by both the Horde and the Alliance in opposition to the growing threat from Ahn'Qiraj.

She was present in Cenarion Hold in Silithus until the ringing of the Scarab Gong by the wielder of the Scepter of the Shifting Sands.

Lynore Windstryke later traveled to Wintergarde Keep in Northrend along with the rest of the 7th Legion to do battle against the Scourge.

Gossip
"We are quickly learning the price of death in this frigid wasteland, <name>. The Lich King's power extends across every inch of Northrend, permeating into the earth itself! He turns our own fallen people against us.

From the sky, risen gryphon riders rain down their vengeful stormhammers as the walking dead assail us on the ground."

Might of Kalmidor
High Overlord Saurfang says: Soon, young ones. Soon the armies of the Horde will arrive. We march. March to the cursed gates and crush all in our way. Let them feel the might of Kalimdor!
High Commander Lynore Windstryke says: You have a way with words, Overlord Saurfang.
High Commander Lynore Windstryke says: As to your warning - worry not. Our troops are all aware of the chain of command. We fight united. Let us hope your own troops remember that...