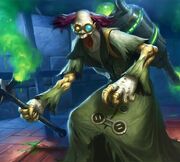 Art for a Forsaken Blightspreader in the TCG, and Mad Scientist in Hearthstone. 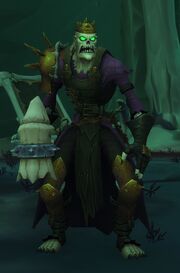 While "mad scientists", often referred as doctors, can come in any race and certainly are not exclusive to the Forsaken, Scourge, or Necrolords, the undead do have their own specific kind of mad scientist, typically male forsaken alchemists who utilizes their on own strain of chemicals from tanks strapped to their backs. While some work with Sylvanas Windrunner to create an even deadlier plague, several are in the employ of the Lich King or the Shadow Council. Maldraxxi mad scientists are mainly found among the ranks of the House of Constructs.