Madam Goya originally ran the Black Market Auction House at the Black Market on the Veiled Stair, which is to the northeast of the Valley of the Four Winds in Pandaria. She accepts bids personally as she is distrustful of others.[1]

After the events of Mists of Pandaria, she moved her operation to the Ring of Blood in Nagrand on Draenor. When Warlords of Draenor concluded she moved again, this time to The Underbelly in Dalaran at the Broken Isles. Now she is at Backwater Beach in Zuldazar.[63.55, 62.68] 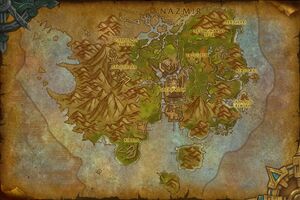 Her bodyguard, Mister Chu is ever by her side, even when Marcus makes an appearance in

At some point she offered cartloads of food at a "reasonable price" to Admiral Taylor and his garrison in Spires of Arak. However, the supplies never arrived.[2]

Goya appears as a a legendary card in the Mean Streets of Gadgetzan expansion for Hearthstone. In Hearthstone lore, she is apparently a member of the Jade Lotus and serves as the museum curator for the Gadgetzan Museum of Ancient Artifacts, which houses the Lotus' secret headquarters.[3][4] Goya's flavor text reads: "She has set up her Black Market here in Gadgetzan for one purpose, to make a KILLING when Beanie Babies make their inevitable comeback.""

Goya also appears as one of the bosses that can be encountered in the Dalaran Heist single-player experience in the Rise of Shadows expansion.