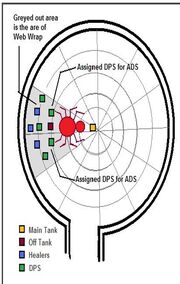 This fight is on a 40 second cycle, with several mini-phases. Ideal DPS is around 20% per rotation.

How to get the MT to survive the Web Spray

At roughly 5 seconds (35 seconds into the cycle) before the Web Spray, healers should put all Heal over Times (and PW:Shield) on the MT and max rank heal to ensure that the tank is at full health before Web Spray is cast. It is ESSENTIAL that the MT has an

[Abolish Poison] on him before Web Spray is cast. The Necrotic Poison will negate all the HoTs that were put on the tank unless it is cleansed off.

If the MT is fully buffed, and receives the appropriate, timely heals and cleanse, then he should survive the 8 seconds of Web Spray without dying. This forces the MT to generally be the best geared Warrior in the raid, with a very high health total and gear equivalent to full Wrath equipment.

During Maexxnas Enrage, have the warrior shield wall for the web wrap. If you need to go into a second enraged web wrap, I recommend the warrior blowing

[Lifegiving Gem]. It's also a good idea for the warrior to pop a

[Greater Stoneshield Potion] about halfway through the fight. It should last for the rest of the encounter. Make certain Demoralizing Shout and some type of melee slow (Thunderfury or Thunderclap) is on Maexxna at all times.

Killed first
Kel'Thuzad yells: Who dares violate the sanctity of my domain? Be warned, all who trespass here are doomed.

Killed second
Kel'Thuzad yells: Fools, you think yourselves triumphant? You have only taken one step closer to the abyss!

Killed third
Kel'Thuzad yells: I grow tired of these games. Proceed, and I will banish your souls to oblivion!

Killed last
Kel'Thuzad yells: You have no idea what horrors lie ahead. You have seen nothing! The frozen heart of Naxxramas awaits you!