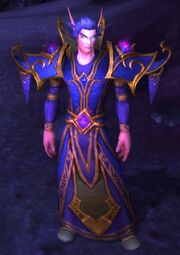 As a blood elf.

“We fight for the Alliance because we believe in its values. And one day I pray we will bring all of Silvermoon back into the fold.”

Magister Umbric is the leader of the void elves. Previously a magister of Quel'Thalas, Umbric and his followers were exiled for refusing to stop their studies of the Void. Free to conduct their researches, his group of blood elves were transformed during an encounter with Void ethereals. Umbric and his people settled in Telogrus Rift adapting to their new way of life with the aid from the famous Alleria Windrunner.

As a blood elf, Umbric was a magister of Quel'Thalas and a dedicated scholar with a tenacious interest in the power of the Void. He believed the void to be a force that could be harnessed for the protection of Silvermoon and the sin'dorei people. His research was opposed by Quel'Thalas's Grand Magister, Rommath, who clashed with Umbric and his followers over their research. Rommath eventually succeeded in demanding they be exiled, reasoning that those who treat with the void pose a direct threat to the Sunwell.[2]

Despite their banishment, Umbric and his followers persisted in their research, viewing the Grand Magister's admonitions as small-minded. Umbric would lead his group south, out of Eversong Woods and into the Ghostlands, seeking to prove the validity of their beliefs regarding the void. There, Umbric and the Silvermoon exiles would make a breakthrough upon discovering the long-buried research of the infamous necromancer Dar'Khan Drathir from many years ago. They would learn that Drathir had attempted to personally enter a void-corrupted world and seize an object of incredible power from within, ultimately meeting failure. Umbric, building upon Drathir's findings, was able succeed where the necromancer had not, and opened the way to the fragmented world known as the Telogrus Rift. The magister then led his followers into the rift to hunt down the powerful item in question, believing it to be the key to controlling the shadows.[3]

At the same time, the high elf hero Alleria Windrunner, who had become aware of the existence of Umbric and his group during her recent disastrous pilgrimage to the Sunwell, set out to locate her similarly-exiled kin, hoping both to aid them in their journey and add their strength to the Alliance. Umbric himself had learned of, and was deeply intrigued by, Alleria's own link to the void and the darkened naaru she had absorbed during the campaign on Argus.

Having successfully reached the Telogrus Rift, Umbric and his fellow exiles quickly discovered an ancient and powerful cube on the ruined planet, and they began attempts to try to open it. Eventually, Alleria Windrunner and an Alliance hero also arrived in the rift, having followed Umbric's trail, and made contact with the magister. Grateful for the aid, Umbric showed the new arrivals the ancient object his followers had been working on. At that moment, the cube opened with an explosion, and subsequently opened a path for the ethereal Nether-Prince Durzaan to access Telogrus Rift.

Durzaan and his forces immediately overwhelmed Umbric and his allies, and began a process to transform them into creatures of the void itself. Alleria, her champion, and some of Umbric's followers battled their way through the ethereals, reaching Durzaan himself and interrupting his ritual. After engaging him in combat, they were able to slay the Nether-Prince, driving his influence from the Telogrus Rift. In the aftermath, it became apparent that although the ethereal's ritual had not been fully completed, Umbric and the other blood elves had been permanently changed; they had now become ren'dorei, or void elves. Alleria quickly offered her aid in training Umbric and the other void elves in accepting and understanding their new forms, as well as a place in the Alliance.[4]

Umbric, on behalf of his people, accepted Alleria's proposal, pledging the strength of the ren'dorei to the Alliance, and deciding to establish their base on the Telogrus Rift. Alongside Alleria, Umbric would continue to lead the void elves after this, even as more like-minded elves began to arrive in Telogrus in response to the recent events.[5] 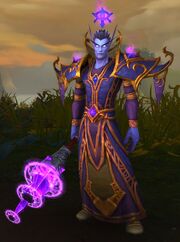 Umbric in Zuldazar during the Alliance's assault

Umbric accompanied the 7th Legion to establish Shatterstone Harbor at Vol'dun on the island of Zandalar. However, he found that there was nothing of interest for him there and that the heat was sweltering. He asked the adventurer to get him out of there so he could go back to doing actually important work.[6]

Alleria later called on Umbric to have the void elves go after Jastor Gallywix in the war effort against the Horde.[7] Umbric was also eager to show Anduin that his trust in the void elves was well-placed.[8] To battle the Bilgewater Cartel forces at Xibala in Zuldazar, Umbric provided a void shard to cast their mechs into the Void.[9] Umbric and the adventurer confronted Gallywix at Atal'Dazar, where he was looting the sacred tombs of the Zandalari kings. He fled through a teleporter to his palace in Azshara, and was swiftly followed.[10] Umbric heavily disapproved of Gallywix's spending and depravity, and was adamant that with his wealth he could do good for the world. They battled Gallywix at the palace only for it to turn out to be an impostor as the real Gallywix flew off.[11] Umbric blamed himself for the Trade Prince getting away, but Halford Wyrmbane assured him that he performed admirably.[12]

In Zuldazar, the forces led by Halford Wyrmbane began an operation to weaken the Zandalari harbor's defenses. Umbric and Shandris assaulted Warport Rastari to plant bombs on the ships there, and Umbric had known many who had been affected by the Zandalari's barbarism before.[13] Umbric performed a ritual to disguise the adventurer as a blood troll, so that the Horde would think it was an attack from Nazmir and not from the Alliance,[14] and provided a

[Portal Orb] to pull the Horde's emissaries to the Zandalari into the Void before they could share intel on the Alliance with the trolls.[15] When the ship Gral's Call discovered the Alliance at Xibala, Umbric opened a Void portal to transport Alliance forces aboard the ship to kill the crew.[16] He also assisted

During the Alliance's assault on Zuldazar, Umbric used the Void to raise the corpses of ravasaurs and a devilsaur, Great Xonac, to inflict psychological damage on the Zandalari, since they revere dinosaurs and revile the undead.[18] He can be seen at the Feeding Grounds and Seekers' Expedition.

Umbric was later present on the Kul Tiran vessel in Stormwind Harbor with the other Alliance leaders to witness the Kul Tirans gifting the vessel to Anduin and rejoining the Alliance.[19]

A corrupted version of Umbric appears in the Vision of Stormwind.

My people have been training. Mastering our abilities.

The whispers speak of many possibilities. We will be ready for whatever comes.

Throughout the Alliance War Campaign

I am grateful for this opportunity to prove the value of the ren'dorei to our cause.

We will do whatever it takes to ensure the Alliance's success.

What is your role in this campaign, magister?

As a magister, my duty has always been to Silvermoon and its people. When the mad Arthas devastated our lands, I knew we must harness every power available to ensure our survival.

Prince Kael'thas proposed one way. I sought out another.

So you sought the power of shadow?

My followers and I felt no loyalty to the Horde. When Grand Magister Rommath forbade our Void research, we did not hesitate to break away and follow our own path.

But hubris got the best of me. I was certain I could master any force we encountered.

The Void nearly claimed you?

I led us right into the ethereals' trap. If not for Alleria Windrunner's intervention, we would have been lost.

As it was, the shadow energies transformed us... and opened our minds to the whispers of the Void. Without Alleria's guidance, we would have fallen into madness.

She has helped us quiet our minds. Dampen the whispers. It is a constant struggle.

Now you fight for the Alliance.

We do not stand with the Alliance out of convenience. Nor is it a mere gesture of thanks to Alleria.

Our ordeal has taught us the importance of great powers being in the right hands. We could not allow the Horde to know the things we know, or to use us as a weapon in their schemes.

We fight for the Alliance because we believe in its values. And one day, I pray we will bring all of Silvermoon back into the fold.

We have the element of surprise for now. Use it wisely.

It is good to be working with you again, <name>. No doubt you are wondering what we are up to.

We are still preparing the ritual. I will let you know when we are ready.

What ritual is this, Magister?

Our friends with the Explorer's League have uncovered these bones. The skeleton appears to be intact, and should be a suitable vessel.

The Void seeks to consume. Engulf. Grow. It will answer our call, and will allow itself to be guided for a time.

I am told the Zandalari hold their dead in special regard, a rather primitive approach for such a grand civilization. One might consider it... poetic for them to be undone by one of their own, hmm?

Followed by a continuation when

Alleria seems to trust him... to a point.
I think we can learn much from him, so long as we remain wary of his true intentions.

When exactly Umbric and his followers were exiled is unclear, but it could have happened at any point after the events of the battle for Quel'Danas and the restoration of the Sunwell based on the fact that his research threatened the Sunwell.