“You cannot defy the Great Work.”

The magnaron are immense, enigmatic giants of molten stone native to Draenor. Directly descended from the immense colossals that once roamed the planet, the magnaron are the ancestors of the gronn, ogron, ogres and orcs and the dominant race of the Breakers, a faction of stone giants who wage an eternal war against the plant-like Primals.

The magnaron were hunted to extinction by the Old Horde in the main universe, but they are still present in the Draenor of an alternate timeline.

As the stone giant Grond battled the Sporemounds, pieces of the battling leviathans fell to the earth and gave rise to new types of creatures. From Grond came the colossals and elementals, while from the Sporemounds many unique beings arose, the genesaur greatest among them. After Grond's death at the hands of the Sporemound Botaan, the colossals continued their war against the Evergrowth and Botaan's minions for thousands of years, but over the millennia these battles took their toll on the stone giants. Just as the colossals had risen from pieces of Grond, new creatures called the magnaron emerged from the remains of fallen colossals. The colossals called on their smaller relatives to fight the Evergrowth, but the magnaron did not obey. Though naturally opposed to the Evergrowth, they felt no loyalty toward their progenitors, and while some did battle genesaur they crossed paths with, most magnaron wandered off into the barren tracts of Draenor to seek out areas of volcanic activity.[1]

A magnaron wandering through the Gorgrond wastelands.

After the colossals sacrificed themselves to kill Botaan in a massive explosion, spores from the plant creature's body, teeming with the Spirit of Life, drifted back to Draenor's surface and clung to the hides of the magnaron, weakening their bodies. Some of the magnaron devolved into lesser giants called gronn, a small number of which continued to degenerate into ogron, ogres and finally orcs. The magnaron, gronn and ogron were known collectively as the Breakers, and though different in many ways, their common ancestry united them against the plant-like Primals, the descendants of the Sporemounds. For many long ages, the two factions engaged in sporadic battles with one another, neither side ever managing to destroy the other.[1]

Thousands of years later, the Orcish Horde marched across Draenor. Warchief Blackhand tasked the orcish Frostwolf, Thunderlord and Whiteclaw clans with wiping out Draenor's gronn, ogron and magnaron, as well as the ogres that had refused to join the Horde. The Frostwolves and Whiteclaws saw no honor in hunting the giants down and held most of their warriors back, but Chieftain Fenris and his Thunderlords did not shy away from the task and reveled in the slaughter of their ancient enemies.[2] 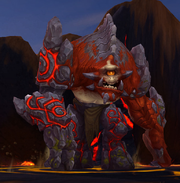 Drov the Ruiner, a powerful magnaron.

On the alternate Draenor, the magnaron are still prevalent in Frostfire Ridge and Gorgrond. The Iron Horde — mainly the Thunderlord and Blackrock clans — has begun enslaving their gronn and gronnling descendants for use as mounts and living siege engines, seemingly even managing to enslave a few magnaron such as Okk. The magnaron Kromog willingly began to assist the Blackrock orcs in their massive foundry after his chamber was unearthed by Iron Horde miners, though his reasons for doing so are unknown.[3]

In Gorgrond, the Iron Horde unearthed an ancient artifact known as the

[Heart of the Magnaron], a device capable of subjugating even a magnaron. Rexxar states that legends speak of such artifacts being crafted by the "worldbuilders" to keep such creatures in check. Determined to not let such a power fall into the Iron Horde's hands, Rexxar and the adventurer retrieved the Heart before using it against the forces of Commander Gar, who destroyed the device with an artillery attack before he himself was killed.[4][5]

Kormrok, a magnaron as ancient as Draenor itself, once ruled over Gorgrond until he was trapped by the Iron Horde and brought to their fortress of Hellfire Citadel. The Iron Horde were entirely unsuccessful in their attempts to break the magnaron's will until the rise of Gul'dan and the fel power that Kormrok found irresistible.[6]

The magnaron are not as large or intelligent as their colossal progenitors, but they command great power, with veins of fire and raw elemental energies coursing over their jagged skin.[1] Both magnaron and goren grow rocky plates on their hides that have magical properties.[7]

The magnaron are mysterious in their ways, ancient and inscrutable.[3] There are few living today who can communicate with these enigmatic giants, and fewer still who understand their seemingly chaotic motivations.[8] Part of an ancient breed, the magnaron practice dark, primal magics, and act according to an agenda they have never shared with anyone. Some claim that if the magnaron win, all of Draenor will be cast into a frozen wasteland like Frostfire Ridge.[9] Among the roiling lava spouts of Frostfire Ridge, the magnaron carve fiery sigils into the earth and shape entire mountains to their needs. They have been known to both enslave and befriend elemental furies, and they are seldom alone.[8] Kron refers to the enslavement of furies as "the Great Work" and claims that it is vital to the world. He also states that the Work "is the way of things" and that mortals cannot understand nor stop it.[10]