Magtheridon's Lair: An Inside Look 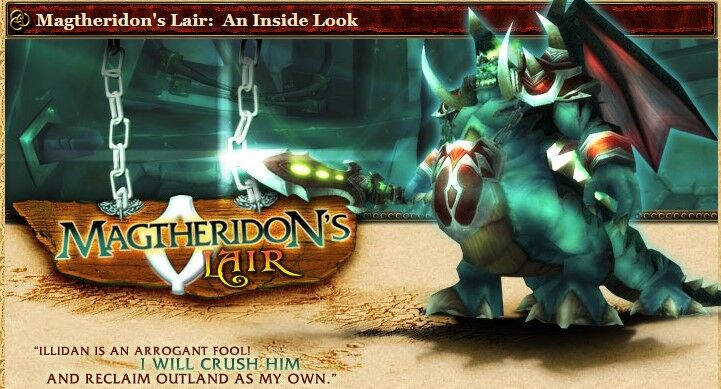 This ominous threat is familiar to anyone who has ventured into the Blood Furnace, one of the first new instances in Outland. Magtheridon, the former lord of this shattered world, has been imprisoned and his blood is being siphoned to create an army of fel orcs. Magtheridon's rage is directed at his jailor - Illidan the Betrayer - and his furious shouts are issuing from somewhere in Hellfire Citadel. The Insider recently took a tour of one of the fearsome new raid encounters in The Burning Crusade - Magtheridon's Lair - and came back to tell the tale. Read on to learn more about the trials that await in the deposed lord of Outland's dark prison…

Transition to the 25-man raid cap

Prior to The Burning Crusade, endgame raids were designed and balanced for 40 level-60 players. Now for the expansion, those numbers have changed to 25 level-70 players - and the raid designs had to adjust accordingly. The new 25-man raid cap presented interesting creative opportunities that didn't exist before, while also opening the door to new challenges.

Some considerations the development team had to look at with this new limit include not being able to take the presence of certain class abilities for granted. For example, decursing (removing curse effects from other players) is a key element of certain boss fights in the 40-man raids. However, with 25-man (and even more important in 10-man raids) the number of players who can remove curses will go down. This is especially true since only two classes (mage and druid) have this capability. Not being able to rely on the presence of decursing - or dispelling, another ability that falls into this classification - means that these powers should not be as heavily emphasized in raid encounters.

However, the smaller raid size allows for encounters with more personality and room for creativity from a design standpoint. For example, it is more feasible to create encounters that emphasize precise coordination and movement when fewer players are involved. This is because it's more reasonable to coordinate fewer people to position themselves correctly for an encounter, including moving to different areas during the fight, than it is the previous forty. Along these lines, Magtheridon will require the raid to use extremely tight coordination and teamwork.

As an example, players will be able to interact with items unique to the environment of Magtheridon's Lair to inhibit Magtheridon's actions at key moments. At times, windows of opportunity will open for the raid to act in unison, and every member must be aware of these limited windows and be ready to respond accordingly.

Many raid encounters have random elements, where certain variables such as the types of attack a raid boss uses, or the raid members who are affected by an attack or ability, are randomized. Two notable examples from Blackwing Lair are Chromaggus' variable breath attacks and Nefarian's class calls. Outside of adding excitement and forcing the raid to adapt and stay on its toes, random elements prevent raid groups from following a scripted pattern of actions in order to defeat a boss - the difficulty of actually executing that pattern notwithstanding.

Magtheridon's Lair is no exception. As they battle the pit lord, players can expect random elements in the form of changes to the battlefield - some of them quite dramatic. As players progress through the different phases of the fight, they will experience being attacked in different ways and at different times. For example, included in Magtheridon's arsenal is a powerful fire attack (similar to that of Magmadar in Molten Core) that targets random areas of the lair and causes a temporary area of effect damage radius. This is just one of several elements that the raid must be ready to recognize and react to.

The raid encounters in World of Warcraft have all undergone significant balancing and tuning before going live in the game world. Generally, new raid encounters such as Magtheridon's Lair have their difficulty based on existing raid encounters - new ones are designed to be at least incrementally more difficult. From there, the designers spend considerable time testing the encounter to make sure it is tuned correctly and that it has the requisite polish.

Magtheridon's Lair went through this same design process. For example, the team added special items in the environment of the lair that, when activated by a player, temporarily inhibit Magtheridon's powers. The initial design for these items had the property that while players were using them, the effect would not be interrupted if the player sustained damage. However, it became apparent that the effect may be overpowered since even Magtheridon himself could not interrupt the effect by damaging the player. The team then changed it so that the effect would be canceled if the player received any damage at all. But after this iteration was tested, it became clear that it wasn't satisfactory either - there are times when receiving damage here is unavoidable. The team eventually found a solution they were happy with - we'll leave it up to you, though, to discover what it is on your own... 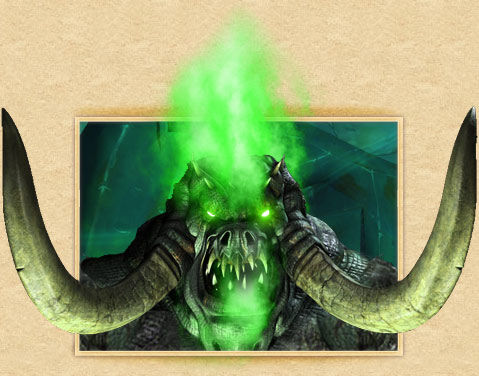 Key to a memorable raid dungeon is integrating it into the world - making the player feel like they are interacting with important characters and events in the Warcraft universe, and creating an evocative setting which also fits into the existing landscape of Azeroth and Outland. Magtheridon's Lair was designed from an early stage with these guidelines in mind.

Many long-time Warcraft players will be familiar with the pit lord from his appearance in Warcraft III: The Frozen Throne. Not long after the Second War, an Alliance expedition stormed through the Dark Portal and into Draenor. Their mission was to defeat the orcs once and for all. As the expedition closed in, the orc shaman Ner'zhul opened several portals to other worlds. The magical stress tore Draenor apart, and the splintered realm of Outland was born.

The Burning Legion took full advantage of the open portals, sending the mighty pit lord Magtheridon to seize the broken world in Kil'jaeden's name. Magtheridon swiftly whipped the remaining orcs into a formidable army and unleashed them against the few draenei that still lived, leaving little opposition to the pit lord's rule.

The Temple of Karabor had once been sacred to the draenei, before orc warlocks claimed the massive structure as their own and renamed it the Black Temple. After the Legion came to Outland, however, it was Magtheridon who ruled from the brooding fortress. He controlled all but small pockets of Outland and continuously reinforced his army by summoning further demons through the portals.

While Magtheridon had crushed many powerful foes, it had been ages since he had been challenged by one who could rival his own might. Thus was the pit lord taken largely by surprise when Illidan and his allies broke through Magtheridon's army and laid siege to the Black Temple. Soon after, Illidan crushed Magtheridon's defenses and cast the Legion's general down.

Many believed that Magtheridon had been slain in the attack. However, as with Mannoroth, it was discovered that the blood of Magtheridon could be used to corrupt the orcs.

Beaten and bloodied, the pit lord was dragged to Hellfire Citadel and subdued by the fel magic of Illidan's most powerful warlock allies. Bound by chains both physical and magical, Magtheridon survives, wounded to the brink of death and drained of his blood each day by Illidan's minions. From his tainted blood a new army of barbaric fel orcs has risen.

But should the pit lord ever break free, Outland will surely tremble once again beneath his terrible wrath.

We hope you enjoyed this preview of Magtheridon's Lair. Every issue, the World of Warcraft Insider contains articles that offer an inside look at the worlds of Azeroth and Outland. You can receive the Insider by email by subscribing today.

This article can still be viewed here through the Wayback Machine.