Majordomo Staghelm <Archdruid of the Flame> (formerly Archdruid Fandral Staghelm of Darnassus) is the penultimate boss of the Firelands raid instance.

Ragnaros' latest chief lieutenant stands before the door to his master's chamber in Sulfuron Keep. Majordomo Staghelm's treasonous efforts will all come to a head before the very seat of his new master.[1]

The loss of his son, Valstann, in the War of the Shifting Sands utterly shattered Fandral Staghelm's spirit. Now empowered by Ragnaros as the new Majordomo of the Firelands (replacing the deceased Majordomo Executus) and the leader of the treacherous Druids of the Flame, Fandral seeks to bring ruin to Azeroth rather than live in a world without his beloved child.

In all difficulty settings, Majordomo Staghelm has a hard enrage timer of 10 minutes.

The fight consists of two alternating phases which will change depending on your raids positioning.

Each of the forms has a unique set of abilities, and these abilities become more powerful each time he switches forms. He casts these abilities when he reaches 100 energy, and regenerates energy more quickly the longer he is in a single form.

It is recommended that you pull him with your raid stacked up, forcing him into Scorpion form. It's base ability is Flame Scythe, a frontal cleave attack that splits the damage done amongst all targets hit. Fandral will only remain in this form as long as enough players are stacked in front of him. Any place works for stacking, but the middle of the circle on the platform is recommended as it works well as a range indicator for the Cat phase.

If the raid spreads out, Staghelm will transition into Cat form instead. When he reaches 100 energy in this form, he will cast Leaping Flames, jumping at a random ranged party member and leaving a pool of fire 20 yards across under them. He will also spawn a copy of himself called a Spirit of Flame when he leaps. The melee should immediately kill these spirits as soon as they spawn.

The goal in this encounter is to leave him in a single form as long as possible, until his energy regeneration simply becomes too high from his Adrenaline stacks for your raid to handle any more, then cluster up or spread out to force Staghelm to change forms. The soft-enrage for this fight comes from the fact that every time he changes form, his Flame Scythe and Leaping Flames will hit harder due to his Fury stacks.

Here is a short summary of the time it takes his energy to go from 0 to 100 based on Adrenaline stacks:

Remember, the number of Scythes your raid can take is not a fixed number. You'll need to figure out your healers' limits, and that limit will go down every Scorpion phase as Fandral gains Fury stacks. It is also important to make sure each phase last as long as possible, as the phases get harder and therefore must be shorter as the fight goes on. After the last Flame-Scythe, you want to spread out as fast as possible, use blink, Stampeding roar, disengage and therelikes, to make the switch as smoothly as possible.

If you choose to tank the Scorpion in the middle of the circle, your ranged dps and healers will want to spread on or just outside the runic circle during the Cat phase. Leaping Flame will target ranged raiders based on their spec role, not based on how many are at range. All ranged dps and all healers are eligible targets, regardless of how close they are to Fandral.

Most raids can start out with 5-7 Scythes and 6-8 Leaps before transitioning, reducing as the fight goes one. Number of Scythes during the seed phase will need be reduced, as the damage from each will be higher due to the reduced number of people soaking each as people run out for the explosion.

Every third shape-change (including his initial change into form when he enters combat), he'll briefly stun the raid and cast either Searing Seeds or Burning Orbs, depending on which form he is swapping into.

Fandral will only be in Cat form for the entire encounter. As the player is constantly taking damage from Fandral, Concentration will not come into effect. Pop CDs on the pull and try to blow him up before his Adrenaline gets too high and he casts Leaping Flame constantly. When he does cast it, move to the edge of the area of effect, then plant, and do more damage before moving again. Cleave the Spirit of the Flame adds that spawn on each leap. Shift to damage-on-the move tactics after about 10 stacks, as by that point Fandral will leap every 5 seconds or so.

Baleroc slain
Well well... I admire your tenacity. Baleroc stood guard over this keep for a thousand mortal lifetimes.
But NONE may enter the Firelord's abode!
Beg for mercy now, and I may yet allow you to live. Well, "heroes", what is your answer?

Druids of the Flame slain
Very well. Witness the raw power of my new lord!

Scorpion Form
The master's power takes on many forms... 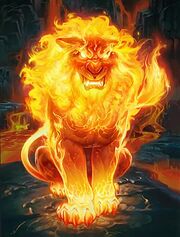 Cat Form
Behold the rage of the Firelands!

Burning Orbs
Nothing but ash!

Death
My studies... had only just begun...