Mak'gora (also written as mak'gora[1] or Mak'Gora[2][3]), meaning "duel of honor",[4] is an orcish custom whereby someone may challenge another person to individual combat. The ritualistic duel[5] has been often used to obtain a position of leadership, such as a fight for the position of group leader,[6] clan chieftain,[7] or Warchief of the Horde, but not necessarily. Mak'gora is practiced by ogre clans as well.[8] 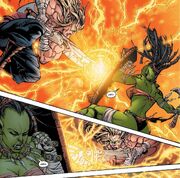 Mak'gora used to be traditionally a combat to the death, but under Warchief Thrall's rule it became a non-lethal combat, though participants can choose to forgo this change.[1]

Refusing a Mak'gora can mean dishonor.[7] When used as a fight to the death, being spared can be perceived as a grave insult for orcs, at least for Thunderlords.[7] In one unnamed orcish clan, the participants were expelled from their clan and left for dead when they refused to kill each other during their Mak'gora.[9]

In ogre clans, only an ogre may challenge another ogre to a mak'gora, but the challenger may then choose a champion to fight on his/her behalf.[8]

The rules of a Mak'gora seem to be different between each Mak'gora since they are chosen and set by the participants themselves. Generally, there are thus no specific rules. There are only two consistent themes in all Mak'gora: once dropped, a weapon cannot be retrieved by either opponent and that the pair must fight to the death or until submission. Magic, for example, has never been stated to be forbidden, and has, in fact, been used in multiple Mak'gora duels and thus seems to be permitted. Similarly, many Mak'gora duels have involved both fighters wearing body armor as well, but it can also be forbidden when explicitly required.

For example, the rules chosen for the Mak'gora between Garrosh and Cairne were:

The rules chosen for the Mak'gora between Shagara and Ashra were:

The first mak'gora between Thrall and Garrosh.