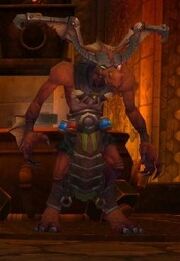 Maloriak is a boss in Blackwing Descent who can be found in the Fleshrender's Workshop, off to the east of the Vault of the Shadowflame. Killing him awards the title Slayer of Stupid, Incompetent and Disappointing Minions which lasts for 30 minutes.

The human Malory was a bright young alchemist until he was kidnapped by Nefarian and fused with the corpse of a dragonspawn. The result - Maloriak - is a bumbling minion who possesses only a dull of his former intelligence.

Periodically, Maloriak throws various vials into his cauldron, causing different effects. The first two Vials will be Red then Blue or Blue then Red, followed by Green, then the cycle repeats.

Maloriak throws a Red Vial into his cauldron, giving him flaming breath. The effects of the Red Vial last for 40 seconds.

Maloriak throws a Blue Vial into his cauldron, granting him freezing magic. The effects of the Blue Vial last for 40 seconds.

Maloriak throws a Green Vial into his cauldron. The mixture explodes and cancels the Growth Catalyst on the Aberrations. The effects of the Green Vial last for 40 seconds.

At 25% remaining health, Maloriak stops throwing vials into the cauldron. He deals more melee damage, gains a new set of abilities, and immediately frees all remaining experiments in the growth chambers.

The Maloriak encounter has some rather unusual mechanics. He switches between several sets of abilities depending on which vial Maloriak throws into the Cauldron. There is a pattern to his vials, with every third vial being a Green one, and the two before it are either Red then Blue, or Blue then Red. Each Vial lasts 40 seconds, after which Maloriak will cast a new one. He also has adds, that he summons in packs of 3 with an interruptable cast, twice every Red or Blue Vial phase.

There is a limited amount of adds he can summon; 18 Aberrations and 2 Prime Subjects, which he will only summon in his final phase from 25% to 0. Because of the adds' Growth Catalyst ability, they need to be tanked away from Maloriak, so he won`t get the buff as well. By the time 9 adds are up, they will be dealing tank-killing damage, which can only be survived by a) popping cooldowns, b) kiting, or c) having a third tank pick up a couple of adds.

The Red Vial gives him a flame breath. Unlike other flame breaths, that you want to stay out of, this one does shared damage to everyone in the breath, meaning that if only the tank is in the breath, he will get one-shotted. So, when he throws a Red vial into the cauldron, everyone but the off-tank(s) should stack up in front of him.

The Blue Vial gives him a spell which randomly freezes a random member of the raid and everyone within 10 yards of that person in an iceblock with 5k hp. One player, preferably a fire mage (for fire blast) should be assigned to breaking these immediately. The raid should spread out for this phase.

The Green Vial wipes the Growth Catalyst buff given by the adds, and puts a debuff on everyone including both adds and players increasing damage taken by 100%. During this phase all dps should be focused on aoeing the adds down before the green phase is over, as he will immediately follow up the green phase with an add summon.

Throughout the fight he will also randomly start to channel Arcane Storms, which must be interrupted, so as to mitigate raid damage. When he reaches 25%, he will release all remaining adds (hopefully only the two Prime Subjects, or you will likely wipe) and enter a Soft Enrage-like phase, where he deals more damage, summons Magma Jets (void zones of fire in a line in front of him), ice orbs that will explode if dpsed down or if they reach a player, and does high raid damage through Acid Storm. Pop all cooldowns, and nuke him through that last phase as quickly as humanly possible. The main tank must avoid the Magma Jets, either by kiting Maloriak around the outside of the room or by dodging out of the way when he performs the casting animation for it.

The main mechanic of the fight is actually the adds, because of their absurd damage. There are a number of ways to deal with this:

10 man: He has a 6-minute enrage timer. To beat this fight, you will have to face two sets of three phases (Red/Blue, Blue/Red, Green). DPS has to be careful, as you don't want to push him to 25% until the second Green Vial is thrown in the cauldron, or you'll likely wipe due to not being able to take down your remaining Aberrations.

Maloriak Heroic Mode undergoes a couple of changes. First of all, he gains an additional phase called the Dark Phase in which Nefarian will throw a dark potion into the cauldron. During this phase, several slime adds called "Vile Swill" will spawn and must be killed. Each slime can cast an ability called dark sludge which puts a dark puddle on the ground under one raid member dealing damage to anyone that stands in it. This "dark phase" lasts for 90 seconds before Maloriak goes back into his normal Red/Blue/Green Phases and ideally the slimes need to be dead before it happens. He also casts a shadow breath at the main tank that reduces healing done to the tank and tank healers need to heal when the breath is not happening.

The Aberrations also have more life requiring higher AOE dps to kill during green phases as well as hitting harder.

Due to the addition of the "Dark Phase" Maloriak's enrage timer is increased to 12 minutes but you are still required to push him into his sub 25% phase after 2 green phases.

Aggro
Maloriak yells: There can be no disruptions! Mustn't keep the master waiting, mustn't fail again!
Lord Victor Nefarius yells: Maloriak, try not to lose to these mortals! Semi-competent help is SO hard to create.

Blue Vial
How well does the mortal shell handle extreme temperature change? Must find out! For Science!

Green Vial
This one's a little unstable! But what's progress without failure?

Death on heroic difficulty
Lord Victor Nefarius yells: Congratulations! Allow me to grant you a title befitting the amazing achievement you just performed! Henceforth, you shall be known as the Slayer of Stupid, Incompetent and Disappointing Minions!