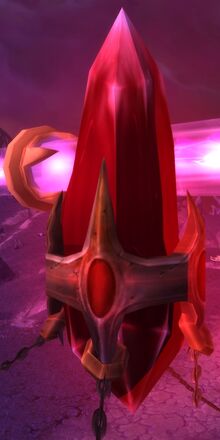 The crystals have multiple uses. In addition to storing arcane energy, they can protect blood elven towns and outposts by empowering a large dome around them, interconnecting with other nearby crystals to increase the shield's radius. This dome is resistant to both physical and magical attacks, while the crystals themselves can act as a natural insulator of substances such as lightning.[5] They can also be used offensively: as seen at the Dawnseeker Promontory, the crystals (if moused over in-game, these are named the Defense Crystals) possess magical anti-air attacks capable of striking aerial enemies down at mid-to-long range. They can also be modified to serve as arcane wards to dissuade intruders.[6]

The crystals require some degree of mana input to be fully charged. If siphoned using a smaller

[Bloodgem Shard], the crystals can give the user a charge of arcane energy to boost their abilities for a limited amount of time, though if a blood elf undergoes this process, the exposure to raw arcane energy augments the elf's innate addiction to magic and is considered hazardous.[7] Subsequent appearances of the crystals (such as on the Isle of Thunder) are utilized on the inverse principle: the blood elves channel magical energy into the crystals, rather than out.[8]

The crystals can also be used for scrying purposes; the largest crystal in the Dawkseeker Promontory is explicitly named the "Scrying Crystal," and overlooks the entire Isle of Thunder. The crystals can come in smaller forms (the aforementioned bloodgem shards; some elves also mention possessing smaller mana crystals to draw upon directly) too. Unstable mana crystals, if not handled properly, could explode with enough force to blow a hole into a city's walls.[9]

In order to fight their magical addiction, many blood elves started draining arcane power from compact mana crystals (which became a popular product).[10] In Outland, Kael'thas' magisters had refined their usage of mana crystals to the point where they could siphon large amounts of energy in a matter of seconds. They did this by attuning smaller bloodgem crystal shards to larger, fully charged ones.[1] 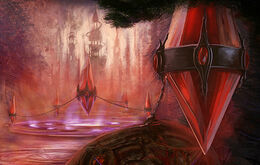