Wowpedia
Register
Don't have an account?
Sign In
Advertisement
in: Mantid, Insectoids, Mists of Pandaria,
and 2 more
English

“We mantid are an elder race. The pandaren you associate with - they are but children. They have their role to play.
Each cycle, our young swarm their walls. The pandaren slay the weak. The strong return.
With each generation, we grow ever stronger.”

The mantid are a race of insectoid creatures native to Pandaria, originally descended from a group of aqir — insect-like spawn of the Old Gods — that settled in the southern parts of ancient Kalimdor. The mantid forced the yaungol out of their homeland Townlong Steppes[3] and devour everything in their path in order to build their own crystalline empire of ruthless warriors and scheming feudal lords.

When Pandaria was found by the Alliance and the Horde, the pandaren were left reeling when the mantid's hundred-year cycle of aggression kicked off a decade too early[4] and their greatest warriors burst through the Serpent's Spine. The beleaguered pandaren fought off the worst swarm in recorded history with the aid of the newly-arrived Alliance and Horde. While trying to isolate the cause of the mantid's erratic behavior, it was revealed that Grand Empress Shek'zeer and many of her mantid were corrupted by the Sha of Fear, and with the assistance of the Klaxxi, adventurers were able to defeat her.

Following the resurrection of the Heart of Y'Shaarj by Garrosh Hellscream, the Klaxxi allied themselves with the Warchief. Their paragons took up guard beneath Orgrimmar to protect the heart of their dark former god, but were ultimately defeated during the Siege of Orgrimmar.

By the time of the Fourth War, Grand Empress Shek'zara has ascended the throne.[5] With the awakening of N'Zoth, she pledged her swarm to the Old God's will. In service of her dark master, she unleashed her forces upon the Vale of Eternal Blossoms to claim Pandaria in N'Zoth's name.[6] 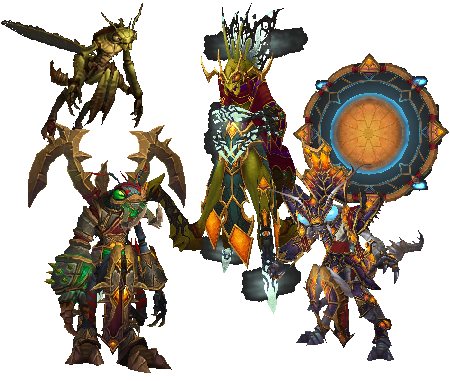 The mantid are an intelligent and highly evolved race of insect-like creatures who have menaced the people of Pandaria since prehistoric times. While their society has a queen, they don't operate as a hive mind.[7] They are sentient beings, capable of constructing tall buildings and mastering weapons.[8]

Mantid act with individual cunning, making them formidable in single combat and unstoppable when their numbers converge. Every mantid generation, the young hatch in incredible numbers and then swarm toward the rest of Pandaria, devouring anything in their path. Only the strongest return. Although the ancient mogu managed to protect their lands by building a gigantic wall between themselves and the mantid, the generational swarms require an all-hands defense of the wall or the very heart of Pandaria will be lost.[7]

The mantid have poison that chews through the skin and infects the blood. It makes for slow, excruciating death when not treated.[9]

Newly hatched mantid have only two instincts: kill and feed. They turn on one another, devouring the weak and leaving the strongest to mature. Those hatched during a swarm - the swarmborn - are turned loose on their enemies instead.[10]

“Back when the world was still young, the first kypari trees bloomed. From the trees, the amber flowed and nurtured us. Kyparite, we called it, the lifeblood of the earth. It healed our wounds and made us bold. It tasted like sweetness and fire, and gave us the strength to conquer all the lesser races.”

Amber is the cornerstone of mantid society. Harvested from the great kypari amber trees, they use this material in their architecture, their art, and their technology. Amber is fashioned by ambersmiths into sharpened blades and weapons.[12] Some heroes among the mantid are even preserved in amber for a time in need.[13]

The empress and her council of Klaxxi safeguard the great trees of Townlong Steppes - known as the "kypari" - as the only source of their precious amber. Legend has it that the kypari once flourished east of the wall, but the mogu cut them all down in their never-ending war against the mantid swarm.[14] The mantid prefer to age Kypari sap before consumption, and use special devices for the process. The design has not changed much over time.[15]

The kypari trees are sacred to the mantid and are regarded as living shrines steeped in their culture. They are the foundation of mantid society. Each tree carries with it a name bestowed upon it by the mantid. The mantid who live at that tree, be it in the roots, in the branches, in the nooks and crannies, share a name with that tree.[16]

Mantid society is organized by caste.[17]

Mantid assaults on the Serpent's Spine are a terrible thing to experience, both as a defender, and as a mantid. Only the smartest, strongest, or most agile of the mantid survive this encounter, and pandaren defenders are slaughtered outright in terrible numbers.

Mantid survivors make their way back to the great tress, often bearing trophies of their conquests. There, they are welcomed back into the mantid society and take their place among their civilization according to the level of their deeds. With each cycle, the mantid grow stronger. Those who travel beyond the wall are forewarned: any mantid you encounter beyond the wall is a hardened veteran, to be feared and respected.[18]

Mantid are born with little on their mind but a lust for battle. Participation in a swarm is not only a cultural rite of passage - it is the catalyst for their physical maturation. Only those who return from battle can develop from a swarmborn into a fully-aware, individual citizen.[19] Most mantid shed their wings as a rite of passage once they grow strong enough to wield heavy armor and weapons.[20]

The mantid view other races such as pandaren as "lesser creatures", and take pleasure in slaughtering them by the thousand. However, they do not consider these lesser creatures to be entirely without purpose, nor is their defeat the mantid's true aim. Rather, the mantid make use of their enemies' defenses to cull the weak from their numbers and hone the skills of the strong. As the mantid say: "Battle is an efficient mentor." The purpose of the cycle is not death. It is knowledge.[12]

While the mantid do use windwool and imperial silk, their preferred material is a type of "fabric" fashioned from the wings of various insectoid creatures - including themselves.[21]

Go together. Swarm the Wall.
The strong will return. The weak will not.
The lesser creatures must die. Sweep them away.[12]

The empress of the mantid is a force to be feared throughout Pandaria. From her, the nearly endless hosts of the mantid are spawned. The empress sings to her swarm, giving them purpose, her words filling their minds. Her desires are their desires, and they do not hesitate to obey.[12]

The mantid empress gives orders and direction to her swarm from a distance, speaking directly into their minds. She appears to communicate with them through some form of sound, although one that is apparently inaudible to other races. Her communication can be blocked through sufficient disruption of the sound of this kind.[12]

Though mantid empresses are long-lived, they are not immortal. A council of mantid elders, known as the Klaxxi, see to the organized transfer of power from one empress to the next. The exact nature of the exchange is extremely secretive, but it appears to involve a trial by combat, with empresses traditionally displaced in their old age by a carefully chosen successor.[22] Remains of the previous empress are fed to her successor. For this reason, the unbroken line of power has extended throughout the entire history of the mantid civilization. Though few in number, the Klaxxi evidently play a pivotal role in shaping and protecting mantid culture. It is unclear if they can directly countermand the will of the empress, however.[23]

Young mantid "swarmborn" are extremely dependent on the voice of the empress. Without her constant communication, they are left in a fugue, milling aimlessly around, and will not even act to defend themselves or their empress. Indeed, the swarmborn are unable even to recognize the empress without her voice speaking from within their minds.[12]

“We are the extension of our Empress's will. Ours is but to serve in Her divine name. Never to question, nor to contemplate; we simply act. We fight, toil, and serve so that Her vision for us is made reality. Her happiness is our reward, her sorrow our failure. We will give our lives for the Empress without hesitation. She is the light, and without Her our lives will be lost to darkness. The chaff of the world tumbles across our doorstep, driven by fear; Her royal swarm will whisk them away. They are but the waves crashing upon the mountain of Her divine will. They may rise again and again; but will accomplish nothing. We are unfazed. We will stand firm. The Divine challenges us to face these intruders. And so it falls to us, Her chosen voice.”

Imperial Vizier Zor'lok is the Voice of the Empress, and his words alone inspire the insectoid race's warriors to give their lives without question.[24]

Mantid weaponry is characterized by large, curving blades of honed amber. Ideal for slicing, these weapons are lightweight and no less durable than those forged from metal.[25] The sword techniques of the mantid are a carefully-guarded secret.[26]

Compared to their Aqir brethren, the mantid are quite adept at using technology to turn the tide of battle,[27][28] and several sappers, saboteurs and bombardiers can be found among their ranks. They also use catapults and war wagons.

The cycle of mantid birthing and building revolves around the kunchong, a colossal insect large enough to threaten whole towns by itself. The mantid revere this enormous creature, and when instinct compels it to stampede throughout the continent, eating earth, trees, and lakes, they follow behind, collecting the amber-colored resin it secretes, birthing their young and creating their homes in its wake. If other races’ homes are trampled by the kunchong, it is of little consequence to the mantid. Where the kunchong's shadow falls, they walk. Where they walk, the land is transformed.[29]

Many of the more mundane pieces of mantid furniture, though amber in color, are actually made from kunchong secretions.[30]

Mantid can generate and hear sounds from a much broader spectrum than those available to the other mortal races. Their innate understanding of extremely high and low frequencies allows mantid to create weapons such as the

Masters of sound, the mantid long ago found a way to use amber to extend the range of their acoustic casting. In this way, they are able to communicate over vast distances. No army has successfully marched on mantid lands undetected, and even lone travelers are urged caution as their movements are no doubt being watched the moment they venture beyond the wall.[14] The technology behind mantid sound beacons is incomprehensible for non-mantid races. They seem to rely on mantid physiology.[32]