Marduk Blackpool, also known as Marduk the Black, was an infamous death knight of the Scourge. He was perhaps most notable for his involvement in the Battle of Darrowshire during the Third War, where he sealed the humans' defeat by corrupting the spirit of Joseph Redpath. Some time thereafter, Marduk retreated to Scholomance, where he served as a tutor until he was finally slain by a group of adventurers.

Marduk Blackpool was a brutal warlord of the Scourge. Amongst his many campaigns against the humans of Lordaeron during the Third War, he cut a swath through their forces at the Battle of Darrowshire, causing great death and suffering with his foul, rune laden sword. He corrupted the spirit of Joseph Redpath, transforming him into Redpath the Corrupted. With the aid of Redpath's twisted spirit, the Scourge forces overran the town and killed all of its inhabitants.

Marduk survived the war, causing great death and suffering with his foul, rune-laden sword. Although the death knight continued serving the Scourge, his sword was lost in a battle near Corin's Crossing. A dwarf captain shattered the sword on his enchanted shield, forcing Marduk to flee the field and winning the day for the Alliance. Marduk's sword sank into the earth and corrupted it, eating a gorge into the land, now known as the Infectis Scar.[1]

Some time thereafter, Marduk became a tutor in Scholomance. He was a partner of Vectus, who researched corrupted dragon eggs in the hopes of creating a plagued dragonflight for their use. He was eventually killed by adventurers.

Even though he was removed from Scholomance with Mists of Pandaria, a vision of Marduk can still be seen during

[41] The Battle of Darrowshire in the Eastern Plaguelands.

Marduk Blackpool and in turn his partner Vectus can be fought like any normal boss in Scholomance. Unlike the other bosses, both of them and the students in the room are neutral and allow adventurers to enter and leave freely without incident. There are two ways to kill Marduk, the first way involves killing all the students in the room as they are, before killing him. Unfortunately, the students in their normal form are very tough. They hit hard and have a very large health pool making them annoying to bring down. However if all the students are killed, players can then attack Marduk and Vectus with little difficulty.

The second way is by using

[Dawn's Gambit] which is a powerful, though experimental device provided by a quest or talking to the quest giver after completion and asking for an additional device. This device when used, turns all the students in the room into hostile skeletons with a much smaller health pool, allowing them to be taken down very quickly.

Attacking Vectus and Marduk without killing the students is NOT recommended, as every student will attack the party. This even at higher levels is not recommended.

When killed both Marduk and Vectus have a chance to drop a blue item, along with a Corruptor's Scourgestone. 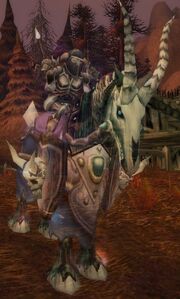 Marduk on his mount during the Battle of Darrowshire.

Can still be seen during