The shattered world of Mardum.

Mardum, the Shattered Abyss (pronounced mahr-DOOM,[1] colloquially known simply as Mardum and originally called the Plane of Banishment)[2] is a prison world that was created by Sargeras prior to his becoming the Fallen Titan to hold all the demons he killed in the Great Dark Beyond. After his decision to destroy all world-souls in the universe, Sargeras shattered Mardum to free the demons that would become his Burning Legion.[3]

Sargeras tasked Brood Queen Tyranna to safeguard the Sargerite Keystone, a device that can open portals to all Legion worlds, even Argus,[4] on this world.[5] During the Sha'tar siege of the Black Temple, Illidan Stormrage sent his loyal Illidari forces to Mardum in order to retrieve the Keystone for his plans to defeat the Legion.

During the third invasion of Azeroth, Mardum was conquered by the Illidari and the Fel Hammer became their order hall. The ship's functions were unlocked using weapons imbued with the mark of a Legion lord.[5]

Though he hadn't yet grasped the volatile realm's full scale, Sargeras had learned how to manipulate and shape some of its energies. Thus, he forged a prison within the Nether called Mardum, the Plane of Banishment, acting as an impregnable pocket dimension from which nothing could escape. Demons would no longer be reborn after defeat, instead they would be contained within this prison for all eternity. After countless demons were imprisoned, the planet soon became overflowed with the captured demons' destructive fel energies, eventually tearing at the boundaries between the Nether and the Great Dark Beyond. Mardum soon started appearing in the distant reaches of the Great Dark as a burning green star.[2] Over the millennia, however, these demons were not idle. The dreadlord Ulthalesh ruled the pocket dimension with an iron fist, plotting for the day when he would exact vengeance.[6]

Sargeras would eventually abandon the Pantheon and come to the conclusion that in order to prevent the void lords and their Old God creations from corrupting world-souls, he had to destroy them all. But Sargeras could not watch over the entire universe all by himself, he needed an army. Thus, he returned to Mardum. Over the eons, the prison had become bloated, the presence of countless demons warping the world into a nightmarish realm constantly bombarded by torrents of fel energy and bathing the captive demons in a sea of volatile magic. Sargeras tore the planet asunder, unleashing the demons and causing a cataclysmic explosion of violent energies that warped his very body. Horns and wings grew out of his body, while cracks of fel energy appeared on his chest and fel volcanoes erupted across his skin, fel fire enclosing his visage. He then imbued the howling masses with his power and gave them a simple choice: join his cause or be destroyed. Thus, the Burning Legion was born.[7]

While most of the demons accepted Sargeras' offer, a few refused, rallying around Ulthalesh. In answer to the challenge, Sargeras forged a great felsteel scythe from the fires of Mardum's destruction, and used it to harvest the souls of the recalcitrant demons, confining them for all eternity in a new prison. Sargeras used the scythe on Ulthalesh last in order to mock him.[6]

By the time of the invasion of Outland, Mardum had become a bastion of the Burning Legion ruled by Brood Queen Tyranna, who Sargeras had entrusted with the

[Sargerite Keystone], a skeleton key capable of opening portals to all Legion worlds. Illidan Stormrage sent his Illidari forces to Mardum to retrieve the Sargerite Keystone in his plan to assault Argus, killing Tyranna in the process and taking control of the Fel Hammer command ship.

Mardum's remains float between the Twisting Nether and the Great Dark Beyond, much like Outland. Littered in fel energies, the main island where the Fel Hammer is situated is dominated by a large area fel volcanoes. 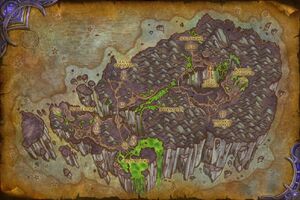 Map of Mardum, the Shattered Abyss.

The main quests in Mardum are part of the first third of the demon hunter starting experience.