Margrave Sin'dane is a powerful lich and the leader of the House of Rituals, one of the five Necrolord houses of Maldraxxus. In the absence of the Primus, Sin'dane was spurred on by her baron Kel'Thuzad to ally with Margrave Gharmal of the House of Constructs in an attempt to conquer the Shadowlands. However, Kel'Thuzad ultimately betrayed Sin'dane to take control of the house. She was freed by the Necrolord Covenant that she had previously fought against, prompting her to realize the error of her ways and pledge her loyalty to the covenant.

Before becoming margrave, Sin'dane was a baron of the House of Rituals. It's implied that she led a rebellion against the previous margrave and usurped him.[3]

At some point, the lich Kel'Thuzad joined the House of Rituals and became one of Sin'dane's two barons, replacing Balmedar.[4] Kel'Thuzad subsequently used his position and influence over the margrave to turn the houses of Maldraxxus against one another in order to further the plans of his master, the Jailer.[5] Sin'dane sent the necromancer Korrim the Cunning to the House of Plagues and offered to provide them with anima shortly before the disaster that destroyed their house.[6][7] Sin'dane and Kel'Thuzad's servant Lady Ouix'Ara began supplying the House of Rituals and House of Constructs with anima from Kel'Thuzad's venthyr allies in Revendreth.[8][9] Finally, the House of Rituals and House of Constructs invaded Bastion's Temple of Courage. The invasion leader, the lich Nalthor the Rimebinder, stated that his "master" had ordered him to destroy Bastion and harvest the corpses of the kyrian for the Maldraxxi armies,[10] but it's not clear if he was referring to Sin'dane or Kel'Thuzad.

The Ritualist and Construct attack was eventually repelled by the Maw Walkers. When the latter arrived in Maldraxxus, their combat prowess in the Theater of Pain drew the attention of Sin'dane and Gharmal—who recognized the outsider as having been responsible for thwarting their efforts—as well as Margrave Krexus of the House of the Chosen, who accused his fellow margraves of treason and ordered them to recall their forces from Bastion, an order they refused. A vicious battle subsequently broke out between the three houses while the margraves returned to their respective strongholds.[11]

After being unable to find any evidence that would mar Sin'dane's adoration for Kel'Thuzad, the deposed baron Balmedar allied with the Necrolord Covenant[4] and helped Necrolord Maw Walkers infiltrate the House of Rituals disguised as Acolyte Nelesis, Kel'Thuzad's acolyte and Sin'dane's favorite consort.[2] In this way, Balmedar and the heroes uncovered and sabotaged a plan by Kel'Thuzad to breach the Jailer's prison in the Maw but were subsequently imprisoned in the Vault of Souls.[12] They managed to escape, but before they had a chance to warn Sin'dane that her baron was toying with forbidden powers, Kel'Thuzad personally confronted the margrave and the house's other baron, Ninadar, at the entrance to the Hall of Sorcery. Sin'dane told Kel'Thuzad that he could not match her power, but Ninadar suddenly betrayed the margrave by stealing her weapon, the Staff of the Primus, while declaring that she was weak and that it was time to anoint a new margrave. This allowed Kel'Thuzad to incapacitate Sin'dane, bring her as a captive to the necropolis Exoramas,[13] and—with Ninadar's backing—seize control of the House of Rituals.[14] 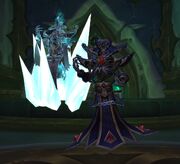 After mustering their forces, the Necrolord Covenant launched an attack on the House of Rituals to remove Kel'Thuzad's influence. Ninadar ended up destroying herself in a battle in the Grimoirium, allowing Balmedar to retrieve the Staff of the Primus. He stated that the attackers might still stand a chance against Kel'Thuzad if they returned the weapon to Sin'dane. After receiving reinforcements from the Venthyr Covenant, the Necrolords reached Exoramas, where Kel'Thuzad was keeping Sin'dane trapped in a block of ice and drawing power from her. While the others held off Kel'Thuzad's skeletal minions, the Maw Walkers focused on weakening the traitorous baron himself so that Balmedar could free Sin'dane. When he placed the Staff of the Primus in her hand, it allowed her to shatter her icy prison. She declared that Kel'Thuzad would answer for his crimes against both Maldraxxus and her, but before the attackers could detain the baron, he escaped to the Jailer with the help of a group of Mawsworn.[5]

Afterward, Baroness Draka asked Sin'dane to join the Necrolords' cause as they would need her strength against the Jailer. The margrave agreed, stating that she now saw "the true threat" before them, and gave Draka the Staff of the Primus as proof of her good faith. The Necrolord and venthyr forces went their separate ways from Exoramas, but Sin'dane and Balmedar stayed behind. She pointed out that he had colluded with outsiders to defy her, which he replied had only been to expose Kel'Thuzad and restore her rightful rule. The margrave declared that Balmedar would atone for his indiscretions by once again serving as her baron as well as her liaison to Baroness Draka, a mission that he accepted.[5]

Hall of Sorcery, while the player is wearing Illusory Guise
Is that you, Maw Walker? Yes, Balmedar informed me about your little ruse earlier.
Nonetheless, your contribution to the House of Rituals cannot be overlooked. I consider you an ally, so I will not betray your guise to my subjects.
Enjoy your time here, "acolyte".