Not to be confused with Dougan. 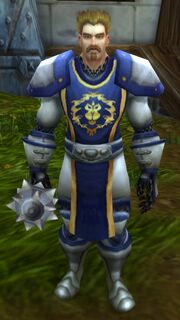 Marshal Dughan is a human located in Goldshire in Elwynn Forest. He is part of the Stormwind Army and is in charge of the security of Goldshire and the surrounding areas.

He is the leader of the military forces stationed there on behalf of the Stormwind Army. He is very concerned about the kobolds to the north and the gnolls and thieves to the west. He wants to know just how far they have spread over the land and asks adventurers to help him with related tasks. When Remy "Two Times" warned him of the murloc danger in the east of Elwynn, he was not convinced that they are a real danger. He realized its importance when Guard Thomas reported him the deaths of Rolf Hartford and Malakai Stone.

When the Emerald Nightmare attacked Azeroth, Dughan and the rest of the town of Goldshire had their minds trapped in the Nightmare. He dreamt about being on a mission against kobolds in Jasperlode Mine with Zaldimar Wefhellt where he failed his men and himself.[1]

Once, Dughan stopped a fight between a traveler and Mardigan. He brought Mardigan to Mardigan's father, Karlain, and warned him that if another fight occurred, the boy would end up in the Stockade. A week later, when Karlain returned from Theocritus's mission, the mage returned to a damaged house, and Dughan told him that Mardigan was a fugitive wanted for murder of the traveler he fought earlier. As he was leaving, Dughan told the mage not to hide his son, as he could no longer protect him.[2]

Since the Cataclysm, he provides transportation horses for new adventurers. Upon hearing about Hogger's capture, he wasn't very satisfied, exclaiming: "He did WHAT? Great, we now have a bloodthirsty beast and his army of gnolls right beneath the streets of Stormwind. What an improvement. I feel safer already."

He is a scout and the elected ruler of Elwynn Forest.[3]

Ach, it's hard enough keeping order around here without all these new troubles popping up! I hope you have good news, <name>...

I wish to ride the Stormwind charger, sir.