Mataus the Wrathcaster is an undead at Tyr's Hand in the Eastern Plaguelands. He was formerly a level 60 elite quest giver at Light's Hope Chapel.

He was a rather unfriendly warlock accompanying Scarlet Commander Marjhan while she engaged in discussion with members of the Brotherhood of the Light, a minor and more violent offshoot of the Argent Dawn. He tended to treat others with outright contempt and held a ridiculously high opinion of himself, even so far to the point of referring to himself in the third-person. Interestingly, the markings on his face were most commonly found on members of the Cult of the Damned.

Mataus was responsible for creating the Ice and Shadow Guard enchantments, which could be applied to leg or head equipment to provide a permanent 10 resistance to the item. Mataus would trade one for 10

[Insignia of the Crusade] and 30 gold.

Mataus somehow became undead after the Shattering and relocated to Tyr's Hand where he is targeted by Brotherhood of the Light. 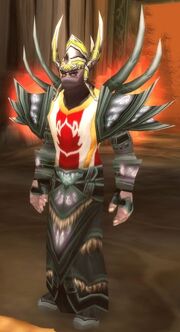 When he was alive

What is it you want, lemming? Get out of my sight before you find out why I am known as the Wrathcaster.

It is power, imbecile.

These fools send idiots like you into Naxxramas to retrieve desecrated armor so that they may purify it and restore the pieces to their former glory.

Just the thought of such utter stupidity brings the bile up to my throat.

I too seek that armor, but in its most foul and desecrated form.

I also seek such power.

I make no pretenses, maggot. The darkness such items hold could very well destroy the both of us. That is why the price is so high. If I'm going to die, it's going to be as a rich man.

And I don't give an ounce of gnoll spit how you die, only that you do as I ask. Bring me what I require and we will both benefit - or die, but I've already explained this...

Aggro
Mataus the Wrathcaster says: Your pain is my release.