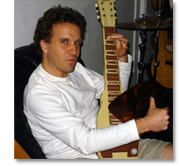 In his childhood, Uelman played classical piano, before moving on to other instruments and genres. In 1993, he sent demos of his work "to every developer who was working on 16-bit games in the San Francisco Bay Area." He created the music using the technical specs of the Sega Genesis.[1]