This article is about the Shadowlands zone. For the quest, see

The Maw, Wasteland of the Damned,[1] is one of the realms of the Shadowlands. This horrific place houses the most vile and irredeemable souls in existence. Ruled by the enigmatic Jailer, the Maw inspires nightmares and legends even among the denizens of the Shadowlands. No one has ever escaped this vile place, and any foolish enough to venture here are never heard from again. At its center lies Torghast, a cursed otherworldly prison where the most wicked souls in the universe are locked away.[2][3] In recent years, the machinery of Death has been broken, and all souls who enter the Shadowlands are now condemned to torment in the Maw, no matter their deeds in life. This has caused the Maw to begin growing larger and more powerful while the rest of the Shadowlands wither from a lack of anima. The Maw is antithetical to Oribos.

Patch 9.1 added new areas to the Maw with Korthia[4][5] and Helgarde Keep.

In the deepest depths of the Shadowlands lies the inescapable Maw. The wretched souls imprisoned in this hopeless realm are the unforgiven and irredeemable.[6] They are imprisoned forever and suffer without end,[7][8] until they are twisted into a mere shade of their former glory. It is then that the tormented willingly serve their tormentor.[9]

Normally, few souls are sent directly here, as even the most evil and prideful beings in existence are given a last chance to atone for their sins in Revendreth. If they fail or refuse to seek redemption, they are condemned to an eternity in the Maw.[10][11][12][13] Still, few souls that the Arbiter found completely irredeemable would be sent directly to the Maw.[14]

The landmass within the Maw consists of pieces of land that have been ripped from a realm that was destroyed upon entering the Maw's atmosphere and whose pieces have become burned and desiccated. The Jailer pieced these together into a single landmass by throwing out chains in every direction within the Maw from Torghast and pulling them inwards.[15] The Maw was sealed and made inescapable with the magic of the Heart of the Forest, with the goal of banishing The Jailer forever.[16]

As the Jailer's dwelling, the Maw is a tumultuous, hopeless maze of torment chambers and endless despair.[17] The laws that bind the Shadowlands are meaningless within the Jailer's realm. Reality is ever-changing within the Maw, which is continually altering itself to the whims of its singular master[18] who resides in Torghast, Tower of the Damned.

Around the time of the Burning Legion's third invasion of Azeroth,[19] the machine of death was broken, causing all souls who enter the Shadowlands to pour directly into the Maw as part of the river of souls. As a result, the Maw grows larger and more powerful while other parts of the Shadowlands have become deprived of anima and have started withering. During this time, Mueh'zala brought Helya to the Jailer's side.

Sylvanas Windrunner has been working with the Jailer since her attempted suicide at Icecrown Citadel and has been perpetrating acts to bring about great amounts of death in the world of the living. As she has fed the Maw with new souls, both she and the Jailer have grown more powerful.[2]

Thanks to their intimate connection to Azeroth's world-soul, adventurers are able to escape the Maw and further explore the Shadowlands, though some of their allies were left behind.[2]

After Tyrande Whisperwind jumped into the Maw by herself, Shandris Feathermoon received visions of Tyrande in the Maw, including specific locations within the Maw of where she'd be able to find her.[20]

During the Chains of Domination campaign, the Jailer uses massive chains to drag Korthia into the Maw. With the power of the new Korthian Waystone to Oribos, covenant forces are able to come and go as they please (instead of piggy-backing alongside the Maw Walker's anima) and start their own assaults on the Maw.

The Maw is not a typical zone, and it has some unique mechanics to encourage players to drop by, gain some currencies by doing activities, and then leave. To start, players can at first not mount up in the Maw, and will travel on foot in general to most locations. However, you can unlock the ability to use a mount in the Maw by doing the Korthia questline.

To keep players from grinding Ve'nari reputation and Stygia all day, the daily Eye of the Jailer comes into play until the launch of patch 9.1. This mechanic gently encourages players to not idle in the zone and, after a while, less-than-gently encourages players to leave the zone as more advanced threats are unleashed. Eventually, the Jailer will have had enough and starts rapidly eroding the player's life force, killing the Maw Walker outright.

[Stygia], advance the Eye of the Jailer and award some standing with Ve'nari. The rares are also tracked in achievements 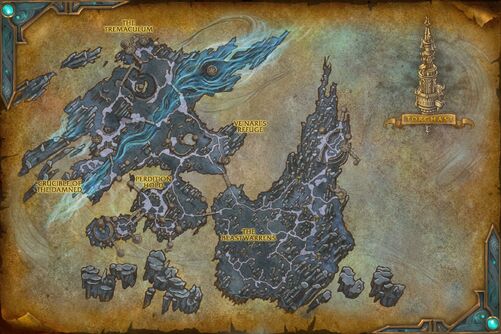 [60] Good News, Everyone! during the Chains of Domination campaign in patch 9.1, covenant assaults unlock. Twice a week, one of the four covenants will take charge on an assault of one of the hubs in the Maw:

The assaults are a great source of reputation with the Death's Advance and the covenant factions taking part in the assault, and have a number of achievements associated with them, including:

Additionally, assaults will award an

[Emblem of Renown] for players who are catching up.

In patch 9.1, Kel'Thuzad sends out one of the Tormentors of Torghast to attack an area in the Maw. Take out the minions and lieutenants to fill the bar, then defeat the Tormentor of Torghast for 10% progress in

[Tormentor's Cache], and likely an item drop or two.

Once a week, players can complete the

[60W] Phantasmagoria quest, which starts from the

Defeat all of the bosses to earn the achievement

[Minions of the Cold Dark].

A great number of mounts, pets, and toys can be acquired from completing tasks in the Maw.