The Mawsworn are minions who serve the Jailer in the Maw. They bring pain and punishment to the most wicked of souls.[1] These soldiers are the very worst the damned have to offer: the result of the Jailer torturing mortal souls until only a mere shade of their former glory remains and they willingly serve their tormentor for eternity.[2][3] The size of the Mawsworn army rivals that of the Burning Legion, and with the soul-river Gorgoa overflowing, their ranks continue to swell.[4][5] With the role of the Lich King having been ended by Sylvanas Windrunner, the Mawsworn have taken control of the Scourge and Cult of the Damned.[6] A group of them captured Thrall, Baine Bloodhoof, Jaina Proudmoore, and Anduin Wrynn and took them to the Maw. The Mawsworn also attempted to capture Tyrande Whisperwind, but she slew her attackers.[7]

To aid their offensive into Azeroth, Mawsworn Soulbearers raised fallen Scourge champions from the past.[8] The Argent Crusade and the Knights of the Ebon Blade led the offensive against them, and enlisted the aid of Horde and Alliance champions.[9] Seeking to strike a definite blow against the Mawsworn, Azeroth's heroes confronted and killed Herald Dalora.[10]

Mawsworn begin as empty suits of armor forged at Zovaal's Cauldron, and then are infused with a decrepit shade to be brought to "life".[11]

The Mawsworn's weapons and armor were designed by the Runecarver against his will.[12] 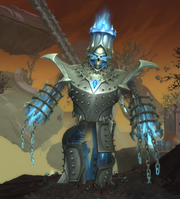 One of the new types of Mawsworn in 9.1.

The Scourge and the Cult of the Damned have become the Jailer's new minions.[10]