Maximillian of Northshire is a chivalrous (if deluded) human paladin found near the Golakka Hot Springs in Un'Goro Crater. With the player as his squire, he strives to save damsels, fight "dragons" and defeat the mother of all devilsaurs. 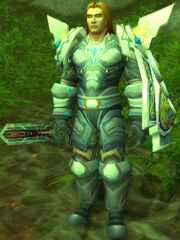 Coming all the way from Northshire Abbey, Maximillian came to Un'Goro Crater seeking to eliminate the evils of the land and have an adventure. When arriving to the land, he set up camp and searched for a squire. He was willing to take anyone, even a member of the horde. After finding a random traveller, the paladin took him under his tutelage and trained him in the ways of the squire. Together with his new companion, they would rescue 'three' Damsels, slay 'dragons', 'talk' to the 'spirits of the light' and kill a brood mother, even though his squire had much to learn.

For instance, when Maximillian threw a damsel off a cliff, the squire didn't catch her and blames him for her death. However, the other two went well, the blood elf damsel got his 'purse' back and the goblin damsel was saved from the bad 'Phoenix'. When the final battle against the brood mother began, Maximillian along with his squire riding on his horse, routed the 'dragon' by throwing rocks at it. When it was time to take it down, the paladin gave all his armour to the squire and he threw it at the 'dragon', thus killing the Brood mother once and for all. At the end of their journey, Maxwell gave his squire a life lesson and gave him one of his remaining equipment before saying their goodbyes.

After replacing his armour, Maximillian journeys to Mount Hyjal to fight more dragons there. He helps defend Sethria's Roost on Mount Hyjal against the minions of Ragnaros during the quest

Still deluded as ever, Maximillian aided in defending southern Tanaris from the Burning Legion during the Legion Invasions. He was accompanied by several of Un'Goro's Stone Guardians and Stone Golems.

During Legionfall's assault on the Broken Shore, Maximillian was marooned on the northern coast of Highmountain, where he fought against "demons" (actually murlocs). The paladin adventurer eventually recruited him into the Silver Hand.

<Maximillian is deep in prayer, oblivious to your presence.>

During The Protectors of Hyjal 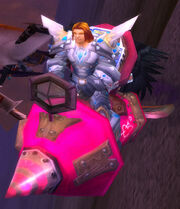 [Big Love Rocket] during The Protectors of Hyjal.

What ho, fellow knights! Are we fully barded and armored? Then let us thrust ourselves deeply into that which they call adventure!

Maximillian of Northshire salutes.
When a Seething Pyrelord uses its Reflective Shield
Stay your blades, heroes. This dragon's scales glow red with flame.

What ho! The pathway to Un'Goro Crater is embroiled in a great fracas! I suspect dragons!
Squires, heroes and damsels alike! Bring thineselves here, and be protected by me!

What ho! Welcome, weary traveler. Come sit by my roaring fire. Never fear, I have secured this position on the beachhead, and will soon thwart the Legion's assault on these lands!

Maximillian and his acts are a clear reference to the tales of heroic knights during Medieval Europe. However, with one of the quest rewards being a toy windmill, he is more so a homage towards the famous novel of Don Quixote. This is additionally supported by his frequent mentions of Doloria, whose name is very similar to Don Quixote's Dulcinea.

His title may suggest that he is a member of the Brotherhood of Northshire (or at least he thinks he is).