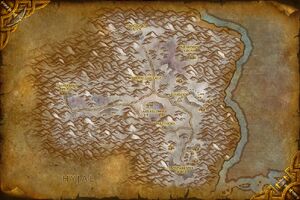 is a huge and deep icy cavern — populated by blue dragons — located near the central part of Winterspring, not far from Lake Kel'Theril or Everlook.

Their matriarch is the reclusive Haleh - only encountered in her high elven form at the peak of the cavern, accessible by a portal rune in the cavern floor. It was she who completed the key to Onyxia's Lair for Alliance heroes (although the attunement requirement for Onyxia's Lair has since been removed). Haleh has four powerful drakes who guard Mazthoril, and leads a sizable army of highly sorcerous spawn and young whelps. Spellmaw is the brood's main patrol, and wanders a slow path around a good third of the lower section of Winterspring. Manaclaw and Scryer guard the runes at the rear of the cavern. Azurous patrols nearby regions in Winterspring for threats against the forces of Malygos. General Colbatann, a notable general of the blue flight, has also been spotted near Mazthoril.

The blue dragons has been removed from Mazthoril. It appears the caverns have fallen under the control of Umbranse the Spiritspeaker. Altered Beasts now roam the exterior of the cave, while creatures reminiscent of Outland guard the Arcane Tesseracts dotting the interior.

After the Fourth War, a goblin in Winterspring told Zekhan that blue dragons are still in the Mazthoril caves.[1]

The creatures added in Cataclysm:

Unlike the other dragons who were removed, General Colbatann can still rarely spawn inside Mazthoril.

The Caverns of Mazthoril are the home of Kalimdor's blue dragonflight.[2] The blue dragonspawn General Cobaltann guards it and the blue dragon matron Haleh oversees it.[3]

The traditional home of the blue dragonflight is Northrend, but more and more dragons migrate to the caverns of Mazthoril in Winterspring. This migration occurs for two main reasons: first, because of the growing concern about another imminent attack on the World Tree Nordrassil; and second, to retreat from the Scourge, which some dragons see as a threat the dragonflight is not prepared to conquer.[4] In both locations, the dragons inhabit massive tunnel systems, where they study magic and prepare for battle against the black dragonflight, the Scourge and other dangers.[5]

The loss of most of his children and mates to Deathwing and the black dragonflight drove Malygos out of his mind, though his presence in the world diminished more and more over time. Perhaps Malygos's last sane act was aiding in the creation of the World Tree over the second Well of Eternity and placing many of his surviving dragons nearby in the caverns of Mazthoril to hold eternal vigil over the sacred site.[6] Although the tree is watched over by four of the dragonflights, it is the blue dragonflight that is particularly devoted to this cause, and while their numbers here are not large, they guard the tree from lower on the mountainside in their caverns.[7]

The blue dragons in, are near Hyjal, are primarily on watch for activity from the black dragonflight, although there have recently been concerns that the blue dragonflight will be needed to assist the dragons at the Summit if the demons in Darkwhisper Gorge attack. Since Deathwing's disappearance after the battle of Grim Batol, the black dragonflight's members have been busy fighting each other for dominance, notably two of Deathwing's children — Onyxia and Nefarion — and could be a considerable threat. To this end, the blue dragonflight organizes an army here, led by the dragonspawn General Cobaltann, to protect the world from the increasing threat of the black dragons. Specifically, Cobaltann focuses on the protection of dragon eggs, which are being stolen by the blacks for some evil purpose.[8]

The goblins of Everlook recently discovered a new mine to the south of their city, not far from the dragon caves of Mazthoril. This mine is valuable due to a large amount of arcanite within it, but thus far it proves inaccessible. While not part of the blue dragon's cave complex, the dragons are territorial, and so the goblins are looking for a hero that can find a way to convince the blue dragonflight to allow them access to the mine, in exchange of a nice reward of course.[9]

Within these caverns lies the true stronghold of the blue dragons, the forces of Cobaltann. Guarding this stronghold is an entire legion of dragonspawn sworn to protect Mazthoril. Night elven forces - including those rare few who can tame the feral frostsaber cats - often clash with the dragonspawn legion, using blade and fang in an attempt to rid themselves of the malevolent dragons.[10]