“The terradynamic exo-plotters are conjoined by hydraulic imaging to the equilibrium enhancers...”

The mechanostrider (or Mechano-strider[2]) is the mount used by the gnomes of the Alliance. They were invented by a young Gelbin Mekkatorque, launching the young gnome's fame and setting him on the path of leadership as High Tinker.[3]

The gnomes' revolutionary mechanostrider represents yet another marvel of their engineering prowess. Each strider is specifically designed with the individual rider in mind. They are constructed using state-of-the-art steam compression, servo-motor dynamics, and duro-steel plating. This offers the rider a reliable and durable means of transportation. Some claim that the mechanostrider's lack of true sentience makes for a very dumb mount. However, the gnomes counter that under a skilled rider, the mechanostrider is more responsive than even the best trained live mount.[4]

A young Gelbin Mekkatorque envisioned the first mechanostrider in Sector 17, his Gnomeregan quarters, which had allowed his diminutive people to match pace with the mighty human chargers. This creation was the one that launched his fame and set him on the path to leadership and the position of High Tinker. Mekkatorque's first working prototype still exists, stored as the centerpiece of his trophy case in Sector 17. All end models still echo the avian gait and kettle-bellied form of the prototype.[3] These features are referred to as the Mekkatorque designs.

It is interesting to note that mechagnomes, some of whom would become progenitors of the gnomish race, have been found in Northrend, and riding what appears to be

[White Mechanostrider Mod B]'s. The enigmatic mechagnomes have adopted Gelbin Mekkatorque's invention for their own mysterious purposes. Mekkatorque considered it to be quite flattering that a race of machines would see fit to use his machine to get around.[3] 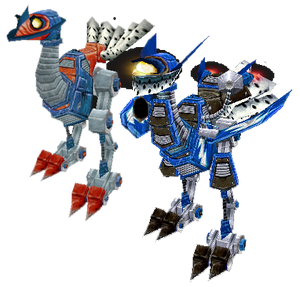 Mechanostrider mounts are available to all Alliance races, while they're initially for gnomes, gaining exalted status with Gnomeregan will allow players to buy and use them. Most can be purchased at Steelgrill's Depot.

The following does not require exalted status with Gnomeregan and is sold at the Argent Tournament Grounds.

In patch 3.0.8, the racial size restriction on mounts was lifted, with the mechanostrider becoming available to all Alliance races when exalted with Gnomeregan. Before this, only gnomes and dwarves were allowed to ride mechanostriders due to the physical size of these races.[5] The RPG information for these mounts was probably an inspiration for making such a restriction in the first place.

The mechanostrider is a medium onstruct which vaguely resembles a mechanized tallstrider. Small oval lamps replace its eyes, while great mufflers extend where its tailfeathers should be.[10]

When gnomes set out to explore the world once again after their city's fall, they soon realized that they needed reliable mechanical mounts[10] because they were mocked for their short stature and slow land speed.[11] Tired of being mocked, the gnomes developed these revolutionary modes of travel.[11] One ingenious gnome spied a flock of tallstriders and remarked upon their grace and strength. Soon after was born the mechanostrider, which quickly became a favorite mount of all gnome-kind.[10] Using steam compression and duro-steel plating, the finest gnomish tinkers created these ostrich-like striders to use as mounts. The mechanostrider can move at speeds up to 30 mph.[11]

All gnome tinkers agree that the striders are only available for small humanoids. Although some goblins have purchased striders for themselves, most of these striders have only proud gnomish passengers.[11] This mechanostrider represents an older model and, while outdated, is a viable and cheaper vehicle. The current model is mechanostrider v. 2.0.[10]

They have a final build dimension of six feet and 300 pounds.[10]

A mechanostrider fights only when ordered to or threatened, lashing out with its sharp beak and claws, or simply hammering at the dnage with its heavy metallic head.[10]