For other uses, see Menagerie. 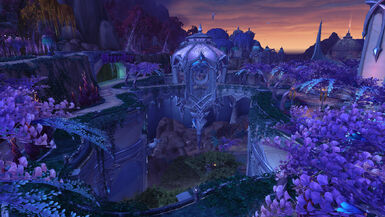 The Menagerie of Suramar.

The Menagerie is a zoological park located on two separate levels in the northeast of the nightborne Suramar City. The area houses an extremely wide variety of beasts and other creatures from various habitats and environments across Azeroth. The contents of the Menagerie are kept for the recreational purposes of the city's population, with numerous viewing areas and exhibits set up to provide unique spectacles of the occupants.

The many different species kept within the Menagerie have been accumulated by nightborne trappers, and are kept docile and obedient through the use of magical collars of domination. The zoo itself is actually situated on two separate levels of the city, with the upper area connecting the Grand Promenade and Twilight Vineyards, and the lower portion accessible from the Moonbeam Causeway from the south.

Each exhibition present in the Menagerie is different, encompassing habitats that include: aquatic, mountainous, tundra, tropical jungle, savannah, desert, forested, and seashore. The star attraction of the facility is the imposing devilsaur known as Su'esh, overseen by Head Trainer Graedis Oenthar. Numerous vendors and stalls are situated around the Menagerie, selling refreshments, souvenirs, and merchandise relating to the exhibits. 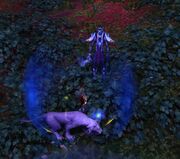 A trapper hunting for more additions to the Menagerie

It is unknown exactly when Suramar's Menagerie was established or when the nightborne began collecting the creatures that now occupy its exhibits, though it presumably occurred sometime in the 10,000 years after the conclusion of the War of the Ancients. By the time Suramar's long isolation ended, the zoo contained beings from most of Azeroth's four major continents, and with the lowering of its arcane shield nightborne trappers were deployed to the surrounding region to acquire yet more specimens.

The trappers outside the city would eventually be discovered by the druids Lilryia Dawnwind and Nighteyes who, with the aid of members of the Nightfallen resistance, began to work against their plans. After attacking and slaying some of the trappers in the forests of Suramar,[1] the group then turned their attention on the Menagerie itself. Nighteyes himself hid in one of the exhibits as a sea lion and directed efforts to sabotage the facility.

The saboteurs, incognito, succeeded in reverse-engineering the magical collars used to keep the Menagerie's occupants tame, and used this knowledge to break many of them from their obedience, causing them to rampage.[2] Following this, they turned their attention to the devilsaur Su'esh and confronted her head trainer Graedis Oenthar. During the fight, Su'esh killed Graedis by eating him. Now freed from her captivity, Su'esh was unleashed from her exhibit by the rebel agents, where she caused mass chaos and destruction all the way from the Menagerie to the Gilded Market in the loyalist Noble District.[3]

Despite the best efforts of the Menagerie keepers, Su'esh would be released on numerous further occasions from her pen and inflict yet more damage and panic on Suramar's loyalist forces, in the midst of the Nightfallen rebellion gripping the city.[4] 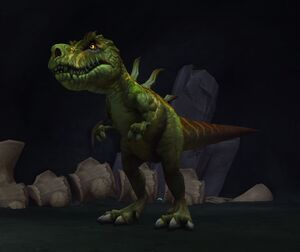