Not to be confused with Felstorm.

Meryl Felstorm[1] (previously known as Meryl Winterstorm) is an undead human sorcerer.[2] He is an incredibly powerful human magic user, with nearly three thousand years of experience, and the foster father and mentor of Med'an, Garona Halforcen's son.

Meryl fought in the Troll Wars. He was killed during the wars, but couldn't let himself remain dead as too many lives depended on the completion of his mission. And so through his magic, he became undead. As such he is neither one of the Forsaken nor Scourge, having been undead for roughly 2,800 years. Alodi regarded him as a great hero.[3]

He later became one of the founding members of the now defunct Council of Tirisfal.[4]

Meryl aided his colleagues against the dreadlord Kathra'natir who appeared in Dalaran to steal the Amulet of Waters.

Garona asked him to take care of her son, Med'an. In anguish over killing Llane, Garona also asked Meryl to hide away her daggers, Anguish and Sorrow, in hopes they'd never have to be used again.[5]

Years later, when Med'an witnessed his mother being kidnapped by the Twilight's Hammer, he chased after her. When Meryl discovered it, he quickly flew after him, arriving in Theramore just in time to warn the island of an approaching Scourge Necropolis. After fighting off the Scourge, he discovered that Med'an's father was Medivh, and along with Valeera Sanguinar he traveled to Ahn'Qiraj, where Med'an was held as a prisoner. They managed to save Med'an but before they were able to leave, they were intercepted by Cho'gall who had knocked Meryl out with his incredible power. Valeera tried to fend off Cho'gall while Med'an tried to revive Meryl but Cho'gall was too strong and growing more desperate, Valeera offered herself willingly to the demon within her body in order to obtain the power to fend off Cho'gall. This allowed Meryl enough time to recover and teleport them to safety. When they reached a secure location, Meryl discovered that the demon that had possessed Valeera was none other than Kathra'natir, a demon whom he and the original Council of Tirisfal banished centuries ago. In order to lure the demon away from Valeera's body, he challeged the demon to possess his body instead and being the stronger of the two wills managed to repress the demon in his body.

Though he tried to contain Kathra'natir, his will eventually faltered during the New Council of Tirisfal's offensive on Cho'gall and his Twilight's Hammer Cult. Having lost control, the demon was able to slay the blood elf Dalynnia Wrathscar and drain her of her power before Meryl got him back under control. Recognizing that his demonic possession was a liability to those around him, he declined membership in the New Council of Tirisfal and left in self-imposed exile, renaming himself Meryl Felstorm as a sign of his corruption.[1]

Meryl Felstorm has been seen in various ancient libraries researching ancient tomes related to binding, imprisoning and banishing demons, in hopes that he might one day find a permanent prison for Kathra'natir.[6] 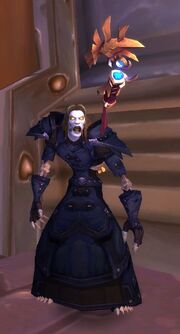 Meryl in World of Warcraft.

Despite Meryl's best efforts to subdue Kathra'natir, the dreadlord managed to break free and attacked the Violet Hold in Dalaran. With the aid of a mage adventurer and the spirit of his old student Alodi, Meryl fought Kathra'natir off, but Kathra'natir escaped into the Twisting Nether before he could be killed. Meryl and Alodi gathered the Forge of the Guardian and brought it to the Hall of the Guardian.

[Aluneth] that was last wielded by Aegwynn, the

[Ancient Scrolls of Meitre] are to be provided to complete the task. He told the mage adventurer to meet with Kalec to obtain the relic while he's tidying up the Hall of the Guardian.[7]

Finding Ebonchill that was wielded by Alodi himself, to which eventually ended up to archmage Arrexis. After finding information on Arrexis, it was confirmed that the eredar Balaadur ambushed him to take his staff. Alodi panics that it is in the hands of the enemy currently invading Azeroth. Meryl suggests that they should recreate Arrexis's ritual to draw out Balaadur to get Ebonchill back.[8] Felstorm tasks the mage adventurer to obtain the

[Ritual Focusing Crystal] in the mountains of Deadwind Pass past Karazhan, and the

[Demon Stone] from Daio the Decrepit.[9][10] Alodi gets his gems from his personal vault in Dalaran and was wondering about Glutonia an old elf woman. Meryl simply says she is a goblin now.[11] The ritual was presented in Faronaar in Azsuna to lure Balaadur into the fray. Ebonchill was then taken from the enemy for the mage adventurer to wield.[12]

Within the Hall, Meryl asked the mage adventurer to find a goblin named The Great Akazamzarak to summon mages around Azeroth to come together. Felstorm reformed the Tirisgarde--a group of magi used by the Council of Tirisfal in the absence of a Guardian--and declared that its goal was to hunt Kathra'natir down.[13]

Later, Meryl catches a magical sickness marked with violent coughs that forces him out of commission.[14][15] It is actually a magical attack of fel origin which Kathra'natir is behind, as he is using the

Meryl was one of the order hall champions who met Khadgar and Velen at Krasus' Landing to discuss the Pillars of Creation.[17] Aethas Sunreaver called for help from the Archmage and Meryl can provide any assistance they can.[18]

[98 - 110] The Dreadlord's Prize
We must make haste to the Violet Hold!
Kathra'natir must not be allowed access to the Forge of the Guardian!

The Forge of the Guardian is an artifact of incredible power.
It was devised by the Archmage Alodi as a method of permanently transferring the arcane power of many mages into the body of one, thus creating a Guardian of Tirisfal.
The last time it was used was in the time of Aegwynn. Since she refused to return her powers so another Guardian could be imbued, the forge was locked away behind the arcane barriers of the Violet Hold.
Its location was known only to the Council. That is, until now.

Pardon me, I forget that my name is not well known these days.
I am Meryl Felstorm, once known as Meryl Winterstorm. I was a founding member of the Council of Tirisfal, but was required to abandon my duties when I became possessed by the dreadlord Kathra'natir. I was able to contain him... for the most part... but the risk was too great for me to remain on the council.
I have since dedicated my life to finding a way to banish the demon once and for all. It seems I have failed.

[98 - 110] Finding Ebonchill
Any information you can find on Arrexis, how he died, and the whereabouts of

[Ebonchill] would be greatly appreciated.

Arrexis was a powerful and well known member of the Order of Tirisfal around the First War. I barely spoke to him, busy with my own goals. I knew he wielded Ebonchill. Then, mysteriously, I returned from a long journey and he was gone. His apprentices were gone and any materials and belongings related to him. The other members of the order were very tightlipped, only saying that something horrible had befallen him.
Ebonchill was nowhere to be found.

The dreadlord Kathra'natir is defeated, but only for now. If we wish to save Azeroth from his evil, we must reform the Tirisgarde.

You are living up to your reputation, <name>. Thank you for handling my duties while I am indisposed. 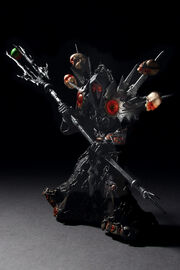 Meryl's first ever appearance was as an undead warlock featured in DC Unlimited's World of Warcraft: Series 1 action figure set. He was wearing the Corruptor Raiment set.