"I hate to think of what those cruel thugs might do to him..." - Kaymard Copperpinch [1]

Metzen the Reindeer is a friendly reindeer. He has been captured by The Abominable Greench outside the Growless Cave in Hillsbrad Foothills. Smokywood Pastures is keen to recover the reindeer.

He was kidnapped during the Feast of Winter Veil by both the Dark Irons of Searing Gorge[68, 34] 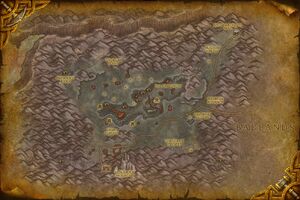 He could be freed using a [Pouch of Reindeer Dust].

Metzen appeared to watch out for the goblin Krizz when he became a Greatfather Winter. Later on, when Krizz learned about a danger at Ironforge Airfield and he was asked to carry him, Fala Fizzlesprocket and her pet Bolts to the airfield. He agreed and even helped to defeat the dwarves.[2]

As of the Cataclysm, Metzen is found in Alterac Mountains outside the Growless Cave, where he has been captured by the Abominable Greench.

Freeing Metzen is a requirement of the Winter Veil daily quest

Around this reindeer's neck is a tag with the Smokywood Pastures logo on it and a name - "Metzen".

Metzen looks at you with sad, forlorn eyes. It is almost as if the reindeer has been immobilized by some unseen force. Let me browse your seasonal fare. What Horrible Presents! You're a Mean One...

You're free, Metzen. The bad greench can't hurt you anymore.