“A kingdom is not a place, but a people.”

Mia Greymane is the wife of King Genn Greymane and current queen consort of Gilneas. 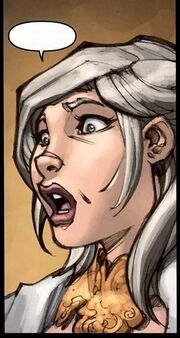 Mia in Curse of the Worgen.

Mia met her future husband Genn at the Royal Aderic Banquet, where he was smitten by her. They later married for love, rather than political reasons.[1][2]

Three days before the worgen attack on Gilneas City, Mia learned about the apparent death of Halford Ramsey from his colleague Cox. Later, during a dinner she scolds her husband for spending too much time in his observatory (where he meets with Belysra Starbreeze, unbeknownst to his wife), neglecting his own family instead, especially Liam, who looks at him as an example. Later on, she witnesses the quarrel between Genn and Vincent Godfrey about the release of Darius Crowley.

She is finally seen while calming down the Duskhaven refugees at Greymane Manor.[3]

She oversaw the evacuation of her people after the Cataclysm struck and the Forsaken attacked her nation.[4]

At some point after Duskhaven is evacuated, Mia points players toward Genn Greymane to evacuate Greymane Manor in carriages. She notes that he is often stubborn.

During the exodus to Darnassus, Mia and her daughter were aboard the Elune's Radiance while Genn was on another ship. The fleet was hit by a powerful storm generated by the Cataclysm, and the Elune's Radiance started to sink. Having a leg broken during the storm, Mia could not move and Tess remained with her refusing to leave, so they both risked drowning. Genn, refusing to lose the last two members of his family, assumed worgen form and joined the rescue efforts of the night elf sailors from his ship. He reached their room inside the ship and brought them out, carrying Mia in his arms and Tess on his back, then he dropped them into the sea, where they were reached by the night elves lifeboats. Mia's broken leg was healed by the druids, and after the storm, both the women reached Teldrassil safely.[5]

During the War of the Thorns, the Alliance was busy evacuating refugees from Ashenvale and Darnassus to Stormwind City. With King Genn Greymane preoccupied with advising King Anduin Wrynn for the upcoming war, a respected authority figure was needed to calm the Gilnean people at the Howling Oak and organize their evacuation to Stormwind City. Queen Mia was the most suitable person available and was eager to fulfill the role when Genn asked her to, especially after Tess Greymane was nowhere to be found. It was mentioned that Anduin admired her quick wits and kind heart, and that while Mia lived in Stormwind with her husband, she spent half her time in Darnassus to support her people settled there, and was a frequent visitor to their encampment, having also formed a close friendship with Astarii Starseeker, one of the Priestesses of the Moon.

Mia asked Maelir, one of the Highborne, to help evacuate her people from Darnassus, to which he agreed, replying that it was his honor to assist the Gilneans. After most of her people were successfully evacuated from the city, Mia, having developed a deep love for the people of Darnassus, was determined to aid in the night elven evacuation as well, remaining until the Burning of Teldrassil and still attempting to aid the priestesses at the Temple of the Moon - despite Genn's urging her repeatedly to leave Teldrassil before it was too late. Although she realized that it was impossible to evacuate their entire population, Mia vowed to Astarii that Genn would lead those who came to reclaim the World Tree from the Horde afterwards. After Tyrande Whisperwind returned to help Malfurion Stormrage, believing that defeating Sylvanas would disorganize the Horde and perhaps give her people more time to evacuate, Mia told the night elves to honor their high priestess as she joined her husband in battle against the Horde.

When Sylvanas and the Horde launched their final assault on Teldrassil, Mia still refused to leave and attempted to help organize the remaining night elves scrambling to enter a portal, despite Astarii's insistence that she return to her husband. Mia was seriously wounded trying to protect Finel, a night elven infant, from collapsing rubble within the Temple, which trapped her beneath their debris and broke her legs. After Genn arrived to rescue her, Astarii managed to heal her wounds. Although Mia told Genn to take Finel and leave her, Genn stubbornly refused, and managed to rescue both of them, bringing them to Stormwind.[6][7] With the World Tree and their second home destroyed, the surviving Gilneans moved to Stormwind, where Mia helped priests tend to the injured Gilnean and night elven refugees in the Cathedral of Light.

After Anduin was unable to directly provide assistance for Tyrande Whisperwind and at her people, Genn mentioned that Mia would likely charge off to battle without him if he did not assist the night elves. Although the Queen of Gilneas did not join the Battle for Darkshore herself, her daughter Tess and many of her people subsequently traveled to Darkshore, openly aiding the kaldorei forces fighting against the Horde.[8]

Mia was present in Bashal'Aran and witnessed Tyrande's speech about Horde's defeat in Darkshore.[9]

Remain calm! We will take care of everybody.
We have carriages at the ready, we're just waiting for King Greymane's word.
We will overcome this. Do not give into panic.