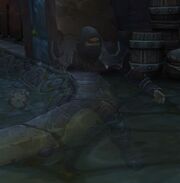 At the Hall of Shadows.

Milton Beats is a level 110 elite human in the Cloaked Vestibule, in The Hall of Shadows.

Milton Beats was a level 33 elite human found in the tunnel from the Hillsbrad Foothills to Ravenholdt Manor. Oddly enough, he wore an orange Syndicate bandana, as well as studded leather, whereas the rogues of Ravenholdt ere garbed in mostly royal blue and black and lack bandanas. Milton ambushed rogues who were foolish enough not to use

[Detect Traps] during the quest

After patch 1.11.0, Milton spawned after the change of

[Detect Traps] from an activated ability to a passive one. However, the giant warning above the chest from which he springed forth, was much more visible and clear to eager and incautious rogues. Anyone still foolish enough to open the decoy was sure to be hazed as they entered Ravenholdt.

Milton Beats is again in the secret Hall of Shadows, guarding the entrance from unexpected guests.