For his character biography, see Mimiron.

Mimiron is an encounter in the Ulduar dungeon. The LMS Mark II leads near his room. The fight consists of four phases, and is a rather healing intensive battle for survival. In each phase, Mimiron uses some vehicle or device. In Phase 1, he enters the Leviathan MkII, in Phase 2 it's the VX-001, Phase 3 sports the Aerial Command Unit, and in Phase 4 he enters V-07-TR-0N, a composite vehicle consisting of all three previous types together. In each phase, the respective vehicle has to be destroyed, after a short interphase Mimiron enters the next one.

On normal mode, Mimiron has a 15 minute berserk timer.

A brilliant inventor, Mimiron has been responsible for several of the most advanced mechanisms on Azeroth. But ever since he was subjected to Loken's disturbed influence, this watcher of Ulduar has only constructed war machines.[1]

A brilliant innovator, Mimiron has crafted countless mechanisms throughout the history of Azeroth that have inspired awe and wonder. But since falling under Loken's disturbed influence, this watcher of Ulduar has only constructed machines of war and destruction.

Mimiron engages his enemies with inventions rather than directly in combat. The Leviathan MK II is a deadly vehicle that assaults the Tank with powerful attacks, the VX-001 which strikes enemies with rocket blasts and laser barrages, the Aerial Command Unit which engages enemies from the skies, and finally the V0-L7R-0N unit, which combines the might of all of his inventions. 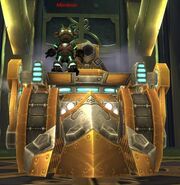 When the Leviathan Mk II is defeated Mimiron will summon his VX-001 module. 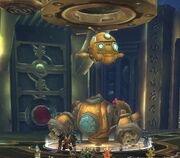 When VX-001 is defeated Mimiron will summon his Aerial Command Unit. 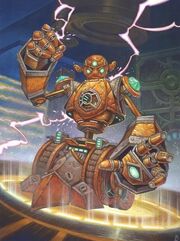 When the Aerial Command Unit is defeated Mimiron will take his final form.

DO NOT PUSH THIS BUTTON!

Ranged should spread out around him just outside the circle of mines. Melee other than the tank should group up behind the MKII inside the circle of mines. He will cast plasma blast every 45 seconds. All healing should be on the tank unless someone is likely to die otherwise. Shock blast usually follows closely after plasma blast. The tank should run directly away from the front of the MKII and then reengage along the same vector after the blast, and hopefully face him the same direction.

Ranged DPS/Healers who are hit by Napalm Shell do not need to move after being hit. The flame effect is only graphical.

Healing on this phase is priority on the main tank, then people hit by Napalm Shell.

This phase requires a melee tank.

Ranged can stay at a distance from the boss and everyone should spread out equally around the mimiron, as soon as the mines have despawned (be careful - sometimes mines appear to despawn but are still active).

Rapid Burst does minimal damage compared to the other attacks, but that deals damage to all targets in front of VX-001. Rocket Strike causes a red target to appear on the ground. People must move out of this target within 3s or they die. Only one rocket is fired each time in Phase 2. As soon as the dps observes that the VX-001 casts Spinning Up, everyone must move behind it. Standing in front of P3Wx2 is instant death.

During the Laser Barrage melee should stand at the edge of the cannon's hit box as meleeing from the center can move you into the laser barrage.

Healing in this phase is mostly AoE.

Everyone should move into one third of the room, as marked out by the lines on the floor. The Healers and ranged except for the ranged tank should be in the back middle as far away from the bot spawns as possible. A warrior can use

[Spell Reflection] on the Plasma Balls throughout the phase and maintain good threat which will endure into phase 4. This avoids most of the damage from the Plasma Balls and allows proper allocation of a DPS class. The ranged tank needs to immediately pick up the boss. The melee tank(s) should start picking up the smaller bots that start spawning around the room, staying away from and killing the Bomb Bots that the Aerial Command Unit drops. He can be seen casting "Bomb Bots' when he drops a single bomb bot to the floor below, it will then chase a random player until killed or meeting with that player and exploding. Bomb bots can be slowed. The following macro can be used by DPS, Healers and even Tanks with instant ranged attacks to ease the burden of bomb bots. With the raid as a whole using it bomb bots can be destroyed easily before they reach the raid.

Alternatively a plate DPS can stand under the Command Unit and taunt the Bomb Bot as it lands. The bot will move to them and explode. This damage is easily sustainable (25 man) with fire resistance and healers aware of when the bot is incoming. The rest of the raid should stand back from this bomb soak with melee moving in when the Command Unit is grounded. Be aware that if you move in while not on full health you may be caught in the blast of the last bomb dropped before grounding so hold on for a heal before moving in to DPS. No bombs will be dropped during the ground phase. This approach will allow more predictable healing of bomb damage and save DPS time trying to kill it (as it will kill itself).

The Deadly Boss Mods addon is very useful during this phase. It will automatically change the loot setting to Free For All during this phase and will return it to its previous setting at the end of the phase. This is so electromagnets can be picked up by melee. They drop off the Assault Bots. Once picked up, this item should be used underneath the Aerial Command.

Healing on this phase is focused on the range tank and melee tank(s).

Each of the previous phase's targets have their own health pool and can be targeted separately. All three targetable sections begin this phase at 50% health, and all sections need to die within 10 seconds. If not, the parts will not die and respawn soon after.

The raid assignments are as follows: the main tank needs to pick up the MKII the same as in Phase 1. The ranged tank needs to pick up the Aerial Command Unit the same as in Phase 3. From what we could tell, there is no threat reset between the phases. The VX-001 remains untanked. Note that compared to the previous VX-001 middle phase, it is essential that during P3W the tank moves away and circles back behind the VX-001, just like all other raiders. This is because of cooldown timers, which make the first and third shock blasts happen soon after the P3Wx2 attack from the middle section (as of the current(When?) live realms). The P3Wx2 seems to start to the side of where the MKII is facing.

The rest of the raid should stand either directly behind or directly in front of the main tank. Ranged should be outside the land mines, Melee should be inside. 2 Rockets spawn at a time during this phase and must be dodged, as they will still one shot kill anyone they hit. DPS should be split up between the 3 sections to ensure they are destroyed simultaneously and avoid repair – note that melee cannot reach the aerial command unit. 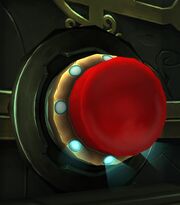 DO NOT PUSH THIS BUTTON!

The Firefighter Hard Mode is initiated by pressing the Big Red Button. This will dramatically change the encounter. All of Mimiron's normal abilities will continue.

Note: If your raid members still die with any regularity to Proximity Mines, Shock Blast, Rocket Strike or Laser Barrage DO NOT ATTEMPT THIS HARD MODE.

Firstly all vehicles and bots in the encounter gain 25% damage and health.

Secondly every 30 seconds three patches of flame will spawn near random players (this makes the spawn locations of the fire controllable). These flames hit for 10,000 fire damage per second. They will slowly creep towards the nearest player (this makes the Fire's location controllable). These flames spawn in all phases and continue spawning between phases.

Thirdly the room will self destruct after 10 minutes, putting a new enrage timer on the encounter.

Fourthly Mimiron will gain new abilities and a new type of bot in phase 3:

The main difficulty to Firefighter is controlling the fires. You want to stay near existing fires so that fires will overlap and give you more of the room to work with. Most of the room will be covered in flames by the end of phase 3. If you do not control fires well you will run out of room and burn to death. Always try to stay together and keep the fires overlapping and to the outside edges.

The following achievements are for the encounter's hard mode.

Berserk
Computer yells: Self-destruct sequence finalized. Have a nice day.
Mimiron yells: Oh, my! It would seem that we are out of time, my friends!

Normal mode activated
We haven't much time, friends! You're going to help me test out my latest and greatest creation. Now, before you change your minds, remember, that you kind of owe it to me after the mess you made with the XT-002.

Activated
Behold the VX-001 Anti-personnel Assault Cannon! You might want to take cover.

Death
Thank you, friends! Your efforts have yielded some fantastic data! Now, where did I put-- oh, there it is.

Activated
Gaze upon its magnificence! Bask in its glorious, um, glory! I present you with... V-07-TR-0N!

Defeated
It would appear that I've made a slight miscalculation. I allowed my mind to be corrupted by the fiend in the prison, overriding my primary directive. All systems seem to be functional now. Clear.

Mortals, I am indebted to you for freeing me from the terrible corruption that besets this place. Though I have not yet recovered fully, I can help you battle Yogg-Saron.

I can grant you and your friends the Speed of Invention, increasing your damage and movement speed. In addition, I can destabilize the matrices of certain Saronite based life-forms, reducing their attack and casting speeds.

Lend us your aid, keeper. Together we will defeat Yogg-Saron.

Unused quotes
Oh, my! I wasn't expecting company! The workshop is such a mess! How embarrassing!