For the enchant, see 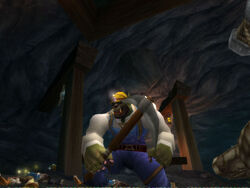 Miners must be tough and precise to succeed - a mining pick is not necessary but can help.

Mining allows you to find and mine ores, stones, and raw gems from resource nodes and certain mobs (see Ore skinning) scattered throughout the world. It is one of the primary professions. Materials from mining and the items miners can create from them are reagents needed for recipes within other professions.

in range of deposit/vein that can be mined

out of range of deposit/vein

For other articles related to Mining, see the Mining category.

Miners pursue valuable and useful ores, extracting them straight from the earth with their picks. Their familiarity with the land gives them a strong notion of where rich veins of gold, silver or even more precious metals can be found, and they retrieve and smelt these minerals for profit, or for use in metalworking of all types.

Miners can spot mineral veins on their mini-map with the Find Minerals ability, and they can gather them quickly (by simply right-clicking on the vein). Miners require mining picks in order to break apart stones and retrieve valuable ores, and, in order to smelt those ores into bars, they need to be near a forge (found in most cities). As you continue to exercise your mining skills and smelt complex combinations of ores into alloys, your Mining skill will grow. High skill values are required to successfully retrieve the rarest minerals.

Minerals can be found all over Azeroth, though some areas are more mineral-rich than others. Valuable and rare minerals are often difficult to find, but the rewards are worth it - they can command high prices and form potent metals.[1]

† Shadowlands proficiency is only available after purchasing the expansion Shadowlands.

Mining is a complementary profession to blacksmithing, engineering and jewelcrafting. These professions rely specifically on ore and ore-derived materials.

Mining can be a profitable gathering profession because of the large sums utilized by the other primary professions. Jewelcrafters require five ore per prospect, blacksmiths can use dozens of bars for specific items, and engineers use large amounts of ore for the many consumable materials they can create.

As with any gathering professional, low-level characters and characters without economic support may consider using two gathering professions. While this denies the player the ability to directly enhance his or her equipment/abilities, it does allow one to, in theory, make money quickly and easily through the use of the auction house.

A trained apprentice miner will immediately learn the

[Find Minerals] ability, which highlights nearby nodes on the mini-map. A miner will also learn the accompanying Smelting skill. This skill is used to convert one or more ore and elemental ingredients into bars, which are used in various professions. This skill can only be used in the vicinity of a forge, and will occasionally grant skill points depending on the player's profession level.

In addition to a miner's pick and their ore-sensing abilities, dedicated ore farming may require a bag. There are a few mining-specialized bags that can be crafted or bought. These bags typically have 20, 28, or 32 slots respectively and will automatically store mined ores. Mining-bags can also store rocks and elemental items found by mining, smelted bars, a few items created in Jewelcrafting, a few items used in Blacksmithing, and mining picks. For a list, click here.

Until patch 5.0.4, a mining pick was required to be in the player's inventory or equipped to mine nodes in-game. It is no longer required, but provides a passive bonus to your mining skill.

Mining skill and its increase

Different veins will require different mining skill levels to loot (e.g. Mithril veins require a skill of 175). The relative difficulty of the mining attempt is color coded as all other crafting and gathering professions:

Although the same colors are used as for other professions, the actual odds of getting a skill point are considerably higher than the color would indicate. For example, at skill 60, a copper vein will appear green but have a ~80% chance of giving a you a skill point. In general, if a node is of the highest-level type of ore you can mine (not counting rare veins like silver or gold), there is a very high chance you will gain a skill point.

To mine a vein, right-click on it. After a brief animation, a loot window will appear containing ore, stone and sometimes rare drops like gems or motes. Nodes that are orange or yellow in difficulty will likely skill your mining ability, so it is important to focus on these nodes when leveling this profession.

Prior to patch 3.0.8, mining a node completely required multiple attempts, one for each unit of ore. As such, each node could yield a one point of skill increase per miner. This would allow several players in a raid or group to mine the same node for a skill-up. Since that patch, a single mining attempt extracts all available loot from the vein. Alternatively, miners can share a node for a skill-up by not looting the vein. This allowed multiple miners to gain a skill point (or tap) a vein, but only one miner will receive all the ore. This again changed in patch 4.0.1, prior to the launch of Cataclysm; Ore nodes (indeed, any Herb nodes or skinnable corpses) can now only be tapped by one player at a time. If a player attempts to mine it while another player is, the player receives the error "This object is already tapped".

As of patch 6.0, all mining nodes could be mined from level 1, however miners whose skill was too low would receive nuggets which combined to form a unit of ore

From Legion onwards, new nodes can all be mined from level 1 assuming the miner has the relevant proficiency. Nodes for new ores no longer give nuggets and skill does not determine yields. Base skill level is a hidden prerequisites for mining quests [citation needed]  which reward mining techniques that grant improved yields or bonus resources.

Smelting provides an opportunity to level mining at a faster pace. Smelting large stores of collected ore can be smelted en masse and in large quantities. Since patch 3.0.8, it has been possible to level from 1-375 only via smelting, but this is expensive, since at certain skill ranges there is a very low chance of gaining a skill point.

There are rare spawns of various ore veins in place of more common metals. Specifically:

These vein types are visually distinct from normal veins. They typically have a glossier, shinier model than normal ore veins.

Additionally, certain ore nodes have Rich nodes that can spawn in higher-level locations. The following ore can be found in Normal and Rich veins:

Outland and Isle of Quel'Danas

Quest ore is usually mined off special nodes, but can also drop off certain mobs in the same area. The ores cannot be smelted and are not "quest items" per se, so they can be traded or purchased off the AH.