Molten Quarry is a sub-zone in southeastern Ashran.[55, 65] 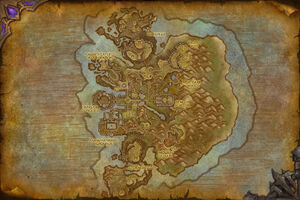 A lava-filled area populated by iron-eating goren and gronnlings, featuring an extensive Ogre Mine sub-zone. The

[Leaping Gorger Residue] and Power Geode buffs can be obtained here, and Goren Eggs looted. The inhabitants of this area are known as the Destructors fighting against the Shapers.[1]

Collect Empowered Ore is the special event in the Molten Quarry.

Scattered around the Molten Quarry are chunks of ore. Players can click on a chunk to pick it up, and can then travel to their faction's mine card to deposit it. The first faction to collect 10 pieces of ore wins the event. Players can only carry one chunk of ore at a time, and their movement speed is reduced while doing so.

[Leaping Gorger Residue] buff. The buff grants the player's jumps a chance to proc the 5-second Leaping Legs debuff, allowing them to execute up to three greatly enhanced jumps, even while in mid-air. The jumps can be used whether mounted or unmounted, and can be chained together to reach otherwise unreachable locations. Additionally, no fall damage will result from falling following one of these jumps, even if the player falls far further than the jumps themselves carried the character.

The Leaping Gorger corpse itself is an object that rarely spawns in one of two locations in Molten Quarry. For precise locations, see here. The Gorger spawns as a corpse and does not need to be killed.

Power Geodes are extremely weak, neutral mobs found around the Quarry. Killing them grants the Power Geode buff, a non-stacking buff that increases all damage and healing done by 100% for 20 seconds. Stacks with the effects of the

[Ancient Artifact]. The Geodes can often be killed with a single attack, and can be very useful for increasing damage output while farming other mobs in the area, or to respond to greater threats. 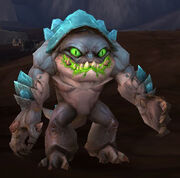 Goren Eggs are lootable objects that can be found lying about the landscape. These generally contain only Artifact Fragments, although other items can sometimes be found.

An early map of Ashran shows this area marked as "Quarry/Mine". During the expansion's beta, it was known simply as "The Quarry".