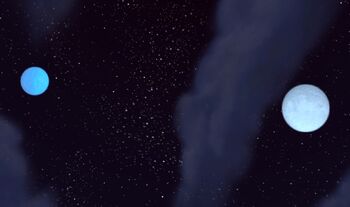 The White Lady and Blue Child over Uldum.‎

Moons exist in the Great Dark Beyond, orbiting around planets.

The planet of Azeroth has two moons.[1][2][3][4] Various cultures may have different names for them, but usually they play on a mother-and-child theme, as the white moon is much larger than the blue one. Once every four hundred and thirty years,[5] the two moons come into perfect alignment in an event called the Embrace.

The larger, bright and silver moon is known as the White Lady or the Mother.[5] The night elves know and worship it as Elune while the tauren refer to it as Mu'sha,[6] the left eye of the Earth Mother.

During the third invasion of the Burning Legion, when Ysera dies in Val'sharah, the White Lady eclipses the sun briefly to seemingly take Ysera's soul. Later, during the Fourth War, Tyrande Whisperwind invokes the power of the Night Warrior, resulting in the White Lady permanently turning from a full moon to shadowed (as in a new moon) within Darkshore but similar to the solar eclipse in Val'sharah.

The smaller, blue-green moon is known as the Blue Child or the Child.[5] The tauren refer to it as Lo'sho and believe that they were born from one of the Earth Mother's tears.[7]

With the addition of weather effects to the game in patch 1.10.0, the Blue Child vanished from the game, likely due to graphical errors.[8] Though it was missing from the game, it still existed in the lore as seen in Twilight of the Aspects[9] and the

[Dragonwrath, Tarecgosa's Rest] quest chain. It returned to the skies in-game with the release of patch 5.0.4, prior to World of Warcraft: Mists of Pandaria.[8]

The two loa Bwonsamdi and Hakkar the Soulflayer have repeatedly been associated with a red moon. In Nazmir, the White Lady is not visible, instead replaced by a permanent red moon behind the Necropolis. Likewise for much of the game's history, Hakkar has been associated with a red moon as well in art. Notably, during the Battle of Dazar'alor, Bwonsamdi summons the red moon before resurrecting countless Zandalari warriors and various beasts to defend the city. There is also Bloodmoon Isle in Northrend, where Arugal both summons worgen and turns some into death knights.

Draenor as seen in Warlords of Draenor's alternate timeline has two moons.[10] Outland, the main timeline's shattered version of Draenor has the same two moons,[11] with the other celestial bodies visible in the sky likely being far away worlds.[12]

At some point, a Lunar Rock fell into Shadowmoon Valley, able to be used for a moonwell.[13]

The Pale Lady as seen near the border of Zangarmarsh.

Draenor's two moons as seen from Shadowmoon Valley, in the alternate timeline.

The Pale Lady is one of the moons orbiting around the shattered orcish homeworld of Outland,[14][15] and the unshattered Draenor in the alternate timeline. The Shadowmoon clan have always derived their magic from the earth and moon.[16]

The orcs used to refer to the Pale Lady in a respectful way, as to a feminine entity of some importance, thus recalling their shamanistic heritage (significant since the storyteller is supposed to be the Warchief Thrall).

Draenor also has a second, smaller moon. It appears closer to the planet than the Pale Lady, but is far darker.

Both the sun and moon are recurring motifs in both Apexis and arakkoa cultures.

There is a reference to a certain "bloodmoon" in the first Warcraft manual, when Garona tells about the creation of the Dark Portal: "As the Warlocks began their incantations to access the power of the rift, a howl began - low at first, then rising in pitch like a darkwolf baying during the bloodmoon")[17]

It likely refers to the red color a fullmoon can take, but it is unclear whether the moon she refers to is the Pale Lady of Draenor, or the White Lady of Azeroth, or another one of the celestial bodies that appeared over Outland after it entered the Twisting Nether - perhaps just the "rosy sphere" mentioned in Beyond the Dark Portal.[15] Other spheres now exist as well, including a rosy one, and a smaller, light blue one.[15] These may, however, be other planets, seen through "windows".[18] There is also the Blood Moon, tied to blood magic used by the Bleeding Hollow clan in both its main and alternate versions, which can be summoned to alternate Draenor. The Pale Lady is not visible when near the summoning platform in Zeth'Gol.

The destroyed planet that was named Fanlin'Deskor by Velen had four unnamed moons.[19]

Nathreza, homeworld of the dreadlords, had dozens of miniature moons.[20]