Moonfang world boss located in the woods on western Darkmoon Island. She (and the rest of the Island) is only accessible while the Darkmoon Faire is active. Moonfang is a no tap mob, meaning all players of both factions that are on her aggro table are eligible for loot.

Her cubs grow into massive, slavering, black-furred killing machines...except for

Dedicated tanks and several healers are recommended for the encounter.

Have tanks charge in and keep aggro on her. All players should run out of the Moonfang's Curse and Moonfang's Tears areas of effect (marked with white circles on the ground), and especially should get out of the way when she Leaps for the Kill.

Group up on Moonfang when she casts Call the Pack and AoE the summoned Moonfang Packmates down. 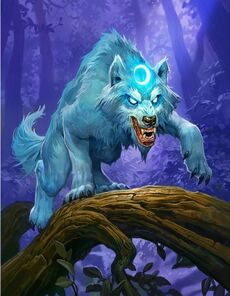 Moonfang in the Darkmoon Races in Hearthstone.