The Moonspray berthed off Zoram Strand during the Fourth War 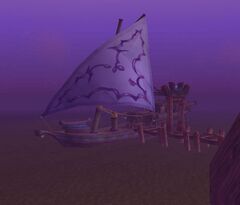 The Moonspray is a night elven transport vessel that serves as part of the kaldorei fleet in Kalimdor. It historically ran between Rut'theran Village, at the foot of Teldrassil, and the port of Auberdine in Darkshore, before the latter's destruction at the time of the Cataclysm.

During the Fourth War, the Moonspray was called into service once more. The ship transported Maiev Shadowsong, Shandris Feathermoon, and Sira Moonwarden from Stormwind City to Zoram Strand in Ashenvale as they followed the tracks of High Priestess Tyrande Whisperwind heading to Darkshore.[1] The vessel remained under the command of its original crew, and was used during the Battle for Darkshore proper to land the first Alliance troops to assault the Ruins of Auberdine.

Later posts noted that this was done because of propulsion issues.[2]