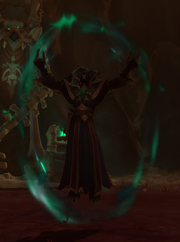 Mortanis in his original necromancer form.

Baron Vyraz ordered Head Summoner Perex to summon Mortanis. Perex found this to be a preposterous idea due to the anima drought and messaged Vyraz back that he'd need to "scrounge up some anima if he wants his boneguard",[1] which is apparently also what happened.

One of the most studied necromancers of the House of Rituals, Mortanis has been working tirelessly on a means of transforming himself into a more powerful form. Now, he is only a few moments from succeeding.

Spawn
The ritual will not be disrupted! Bones of the fallen, awaken and greet our visitors!

All Ritualists slain
Your disturbance matters not, for the ritual is complete.
Mortanis transforms into a massive boneguard.
Behold, my new vessel awaits--a form more befitting of a true master of death!

Spine Crawl
The bones call for you!

Screaming Skull
The skulls of the fallen cry for vengeance!

Lord of the Fallen
The power of Maldraxxus flows through me! I am the face of death!