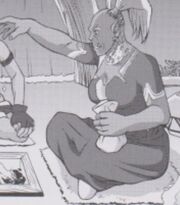 Mother Kashur was the elder shaman of the Frostwolf clan many years before the First War.

Legends: A Warrior Made

When newly-born Draka was shown to the rest of the Frostwolf clan in order to receive their blessing, the clanmates noticed her illness. The clan's elder shaman Mother Kashur thought that perhaps their ancestors or elemental spirits had some plans for her so she blessed her.

Years later, Draka came to Mother Kashur asking for help with her physical weakness since Frostwolf Chieftain Garad had forbidden her family from attending the Kosh'harg celebration in fear of the other clans' disrespect. As Draka begged, Kashur agreed and asked her grandfather Tal'kraa who told her how to proceed. Mother Kashur sent Draka out for components of a 'spell' for a potion, wing feather of a windroc, horn of a talbuk, and fur of a clefthoof. If Draka slayed these beasts and gathered the reagents Draka would be made strong.[1]

When Draka returned, Kashur explained that there would be no potion, but rather that the hunt had already made her stronger. And the quest have truly had the necessary effect so Draka would eventually take part in the Kosh'harg celebration and meet the love of her life, Durotan.[2]

Kashur was an old friend of Ner'zhul. She accompanied her clan for the Kosh'harg celebrations and during one, she tended the injuries of young Durotan done by Orgrim.

Though old and decrepit, she vowed to keep walking to Oshu'gun for as long as she could walk. She brought Durotan to the cave of Oshu'gun at the behest of Tal'kraa, who wanted to see him.

One day, she insisted on joining a clefthoof hunt, only to be fatally trampled before anyone could intervene. Even as the Frostwolf clan mourned her, they celebrated her life and the end that she had chosen; and she was replaced as the clan's elder shaman by her apprentice Drek'Thar.

Mother Kashur's spirit, like all the spirits of the orcish ancestors, was drawn to the sacred mountain of Oshu'gun by the psychic call of the dying naaru K'ure. Kil'jaeden impersonated her to convince Drek'Thar that the Frostwolves should reject the practices of shamanism and study the path of the warlock, though Durotan resisted this idea.[3]

Mother Kashur is known to have had a great black wolf named Dreamwalker as her companion and mount.

Greatmother Geyah has taken the role of a clan mother and thus Kashur speaks to her in her dreams.[4] Today, the spirit Mother Kashur assists members of the Horde aiding the Mag'har in combating the void creatures that have sprung up around the mountain.