Mountain giants are colossal creatures, crafted by the titans when the world was young.

Mountain giants are composed of living stone and stout flora. Crafted epochs ago by the titans from massive sections of stone, these creatures seek to protect the natural environment from any who would cause it harm. Benevolent and solitary by nature, the mountain giants have awakened to find that the tranquil world they once helped to shape has become a hectic battlefield of fire and sorrow. Now the mountain giants have pledged their courage and strength to the night elves' cause — and stand ready to banish the last remnants of the Burning Legion from the world. These giants can take incredible amounts of punishment from attackers.[2]

Later, they were rallied in Feralas and aided the elves once again.[citation needed]

A healthy giant eats three square meals a decade, and they relieve themselves every fifteen to twenty-five years.[7] The ancient cliff giants of the southern region of Azshara consume the rock and buildings of the land for sustenance. The excrement from their consumption is a highly malleable and extremely strong crystal known as Azsharite. The formations litter the southern arc, but few are ever recovered due to the extremely violent nature of the giants. The giants devour trespassers, and their organic bodies are also transformed into Azsharite. Many heroes recover enough of the Azsharite for the creation of powerful weapon's body.[8]

Despite being creations of the titans, some mountain giants, like Baron Kazum, serve the Elemental Lieutenants of the Old Gods. Theradras enthralled the behemoth known as Landslide when she took up residence in Maraudon.[13] It is unknown what the story is behind the others. 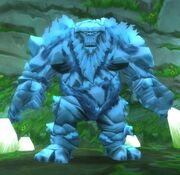 The mountain giants of stone have northwestern Feralas as their main area, where they go under the names of Cliff Giant and Land Walker. Their natural life spans measure into thousands of years.[citation needed]  Mountain giants appear to adapt to their surrounding environment and take on characteristics, such as taking on a differing coloration than their standard grey and green. Mountain giants found in desert regions and other places where the soil is naturally red-tinted take on a sandy colored appearance, but their mossy covering usually remains greenish. Mountain giants found in particularly rocky areas without much greenery can carry mossy covering with a decidedly gray or silvery appearance.

A mountain giant in the RPG.

Playable mountain giant in the RPG.

The giant has a thick humanoid build and weathered and rocky skin. Its arms are very long for its build, while its legs are quite short. This great creature looks to be composed of roughly hewn stone, patched with moss. Its fists are the size of human torsos, each of its fingers the width of a human arm. It rumbles as it stares down at you. Birthed from the stone, the mountain giants were created to shape the world's mountains. Once they roamed everywhere, crafting the craggy peaks and carving the valleys of Azeroth. Now, few remain to carry out their work. Those left, though, are considered mighty creatures of mythic power and are seen as the mightiest warriors in the world. Mountain giants measure a towering 20 feet tall and weigh nearly 12,000 pounds. Their natural life spans measure into the thousands of years. They carry valuables in cracks and ledges of their skin, tucking jewels and items into niches where they will fit. They leave larger items in mountain caves. They normally eat three meals per decade and go to toilet every 15 to 20 years.

Mountain giants are hermitic, content to hide away in the remote mountains of the world. They are slow to anger, ignoring most annoyances as temporary problems that will eventually disappear. When stirred to anger, however, they are frightening and dangerous. A few years ago, they awakened to discover that the tranquil world they loved is besieged by fire and ash. They left their mountain peaks to join their old allies, the night elves, against the Burning Legion and other forces of destruction. Mountain giants do not reproduce. All mountain giants that exist today are the same creatures that the titans created at the dawn of the world, and the immortal creatures tend to be perpetual and unchanging. Thus, every mountain giant that falls in battle is one that cannot be replaced.[14][15]

Mountain giants can see twice as far as humans in starlight, moonlight, torchlight, and similar conditions of poor illumination. They retain the ability to distinguish color and detail under these conditions. Mountain giants are immortal and never suffer the effects of aging, nor can they die of old age. They can die through other means, as can mortal creatures.[16] Mountain giants eagerly enter melee combat, believing (usually correctly) that they can destroy anything with their clubs and can absorb whatever their enemies throw at them. They enter the most violent areas of melee, offering themselves as targets to protect their allies.[15] Mountain giants use longspears formed from mountain stone. The stony hide of the mountain giant is hard and thick, providing it with some protection from magical and normal attacks. A mountain giant can throw rocks as well as any giant. A mountain giant can catch rocks as well. A mountain giant can shape an existing piece of stone into any rough shape, up to thirty cubic feet at a time. The mountain giant can also use this ability to heal itself.[14] Mountain giants speak Darnassian and Titan. Mountain giants do not concern themselves with learning other languages, but a few of the more adventurous ones find it beneficial to speak Common. But their speech tends to be crude and dim-witted.[16][15][17] Every once in a while, a mountain giant leaves its home in Kalimdor and travels into the larger world. An adventuring giant usually joins a particular night elf friend, but not always. Mountain giants rarely explain their actions; they simply walk out of the forests, then travel the roads, or the trackless wilderness, or board a ship without a word; perhaps they simply assume that everyone else takes it on faith that they know what they’re doing.[16]