Mug'thol, a ferocious and crafty warlord, rules the Crushridge clan.

When the Horde was defeated and scattered, Mug'thol was a member of the Stonemaul ogre clan. The clan apparently split into two, one group remained in Lordaeron under the leadership of Mug'thol while the other group traveled to Kalimdor and joined the New Horde.[1]

Mug'thol led his group of ogres in the Plaguelands and was preparing them for battle in the hills, however, he found himself caught in the middle of a battle between Sylvanas Windrunner and the dreadlord Varimathras.

Sylvanas needing to bolster her forces, she raided one of Mug'thol's camp and discovered the clan. She then attacked Mug'thol's encampment and tried to possess him; Mug'thol warned her that she would fall, but Sylvanas had one of her banshee sisters to possess the ogre, who then declared that his allegiance was now to the "pretty ghost".[2]

The Crown of Will

Later, Mug'thol and his ogre warband were sent to Alterac to retrieve the

[Crown of Will] for Lady Sylvanas. Unfortunately, instead of returning it, he decided to try it on. The Crown of Will enabled him to free himself from the banshee's possession and he defected, establishing himself and his band of ogres in the ruins of Alterac as the Crushridge ogres.[3]

The adventurers of the Horde attacked him in order to get the Crown.

As of the Cataclysm, it has been mentioned that Mug'thol still commands Or'Kalar in Arathi Highlands,[4] indicating that he is still alive.

Mug'thol was an ogre from Draenor who fought during the Second War in the orcish Horde. He is a barbarian.[5]

The ogre’s hulking frame is covered in a mish-mash of scavenged bits of metal and trophies of war, held together by thick bands of sweat-drenched leather hide. He holds a massive tree branch in one hand, leaning it effortlessly against his shoulder. A gemstone covered crown sits awkwardly on his head, leaning slightly off to one side as if it doesn’t fit very well. Mug’thol likes to smash things. Although he has a certain amount of savvy when intimidating other creatures to do his bidding, he knows only one way to fight. He always uses full power attacks in combat, not realizing the disadvantage of doing so. He likes the sound that his club makes when striking metal, and he prioritizes his targets by how amusing he thinks they will be to hit. He typically prefers to strike at enemies with metal shields first, followed by those in suits of metal armor, and lastly those with metal weapons.[6] 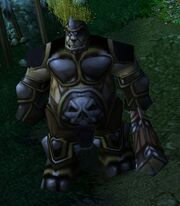 Mug'thol: Me warlord Mug'thol! Me crush weak dead!
Sylvanas Windrunner: I think not.