Muln Earthfury is a tauren shaman and the former leader of the Earthen Ring.[2]

While awaiting Drek'Thar's arrival to Mulgore, High Shaman Muln has a vision granted by the elemental spirits who told him that he will be tested. When he awoke, his colleagues of the Elder Council — Zur'ak Firefist, Krelna, Lenka — were discussing concerns relating to the reliability of the elements. His apprentice, Kettara Bloodthirst, asked him about the attributes of the Spirit of Life as she was eager to learn about the spirit. He explained to her that she is not ready as only a few shaman were able to connect with the spirit. When Drek'Thar arrived, Muln was about to initiate the meeting of the Earthen Ring but Drek'Thar was senile and could not stop speaking about a foreboding shadow. After Drek'Thar's companion, Palkar, took him away to pacify his hysteria, a fire has attacked Camp Narache. The Earthen Ring raced to the camp and with their elemental powers, were able to evacuate the civilians. Yet the threat of the fire was compounded by the threat of a centaur attack. Though the Earthen Ring tried to fend them off, the elementals refused to give them aid, and so they were forced to retreat to Bloodhoof Village.

When the group of shaman reached safety, they talked about how the elements have been failing them lately. A runner interrupted their discussion and told them that a newcomer drove off the centaur and put out the fire in Camp Narache. Muln and the others went to meet the stranger only to discover that it's Shotoa. Muln recognized him from the stories his ancestors told him but was told that Shotoa fell to his death trying to save his apprentice two hundred and fifty years ago. Shotoa informed him that he survived by being transformed and preserved by the elements and that he's come to help by teaching them a new form of shamanism that doesn’t require them asking from the elements but rather to command them. Muln and a few others were wary of this new method of commanding the elements and believed that it was safer to follow their traditions.

Shotoa demonstrated the superiority of his method by guiding them to a giant twister rampaging through Mulgore. Shotoa asked them to stop or contain the cyclone. The Earthen Ring shaman can't even get their elementals to try aside from Muln and his apprentice Kettara Bloodthirst, though the elementals they summon fail at their task. Shotoa then demonstrated his power by dispersing the cyclone with his own elemental powers, though such a display of power appeared to have caused him some pain as he later collapses and mutters about the "fire" biting at him.

The Earthen Ring seemed to split between Muln and Shotoa supporters. Kettara talked to Muln about Shotoa's methods and tried to convince him to have an open mind about change. Muln however, continued to believe in the old ways and rejected Shotoa's methods, no matter how much more appealing his methods look. Muln used the orcs abandoning their shamanistic ways for warlock magic as an example of change leading her people to ruin. Yet Ketarra counters that the orcs arrival to Kalimdor was an example of positive change as the orcs were able to save the tauren from the centaur. They both recalled when Muln first met her 5 years ago; a day when he heard her name from a wind and asked her to join the Ring. Ever since then they forged an amazing friendship and fought off some Grimtotem tauren harassing orc settlers. Kettara told Muln that there are times to resist change and there are times to accept it but change eventually comes naturally.

Kettara decided to follow Shotoa and Muln decides not to stop her, though he talked to Krelna, the only elder who remained with him, to have her send runners to other shaman so they can discuss what direction to lead the Earthen Ring. He then traveled to Orgrimmar to seek Warchief Thrall's council on the matter. Thrall was unsure on the matter of Shotoa. He told Muln that change is a natural part of life but it's only good if it's right for their people. He advised Muln to follow the guidance of the spirits. Muln then relayed his fears with Drek'Thar about Thrall's indecisive stance. Drek'Thar told him that it's his fault as his advice to Thrall has been useless lately. Drek'Thar told Muln that lately he's been seeing two futures and his visions have been less reliable for Thrall. Drek'Thar told Muln that a time will come when the Earthen Ring will become Azeroth's salvation or lead it to ruin. Drek'Thar suddenly becomes frantic and warns Muln about the “fire that consumes all”.

Muln went back to Mulgore where he found out from Krelna that Shotoa had led a lot of the shaman away to teach them his militant path of shamanism. Muln asked the Spirit of the Wilds for guidance and he received a vision of the cavern Shotoa fell into, where he learned that Shotoa wasn't preserved by the life force of Azeroth but by the energies of Ragnaros' release. Shotoa is in reality, a fire elemental wearing his shape.

Muln gathered the rest of the shaman and followed Shotoa and his group to Feralas. It is later revealed that Shotoa led his followers to a Grimtotem ambush in the hope of weakening the Earthen Ring. Muln and his forces arrived but with the elements in disarray, they were at a disadvantage against the Grimtotem warriors and shaman whom were using Shotoa's more reliable shamanistic methods.

Shotoa commented that a shaman as powerful as Muln could usurp authority from the weaker Grimtotem shaman controlling the elementals and save Kettara, (who was held captive at the hands of a giant earth elemental) if he imposed his will on them.

Muln tried asking but was unable to break the earth elementals' control, so he helped in the main fight, destroying a number of fire elementals to try and get to the shaman commanding the earth elemental. He was too slow and the Grimtotem orders the elemental to crush Kettara. Muln promptly caused Shotoa to burst into flames before using a cyclone to fly at Shotoa in a rage.

Muln told Shotoa he knew his secret, prompting him to burst into flames as he battled Muln. Shotoa told Muln that his master has forces all over the world working to bring its end. Muln opened a chasm under Shotoa trying to trap him but he was unable to get it to reclose, so he asked air, water, and earth elementals to aid him. At first they refused to work together but Muln motivated them to work together by telling them that they’d all be threatened with slavery under Shotoa and his fire elementals, which prompted them to work together.

The three elementals each counter part of Shotoa's powers allowing Muln to crush his head with his totem. The other shaman defeated the remaining Grimtotems with lightning but they find it's tragically too late to save Kettara's life with Muln's healing. She died in his arms.

Kettara, along other deceased shaman, were given a fully shamanistic burial ceremony, with Kettara being cremated along with other fallen shaman. Muln tells the other members of the Earthen Ring that they're going to use the old ways to continue guiding the elements even in dark times.[3] 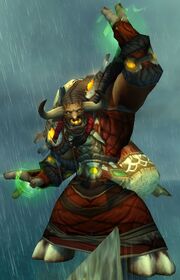 Muln in the Maelstrom

Muln Earthfury made his in-game debut at the Maelstrom, helping Thrall, Aggra and Nobundo maintain the rift.[4]

He appeared and died in a nightmare caused by Iso'rath, but this was just imagined by the adventurers.

Muln was worried about Thrall at Maelstrom when the former Warchief could not focus on the shamanistic duty. When Thrall returned from his journey, Muln was happy to see Thrall more calmer now.[5]

The shaman of the Earthen Ring later traveled to Mount Hyjal, to lent aid to their Cenarion Circle comrades. Muln was present to see Thrall and Aggra become life-mates.[6] Later, Muln, Nobundo and Aggra were rescuing Thrall, when he was tormented by Deathwing.[7]

After the death of Deathwing, he has stepped down as the leader of the Earthen Ring, being replaced with Thrall.[8] He learned about the fate of Theramore. He was worried what Garrosh would do to Nordrassil. He was present when Thrall received a vision about the enslaving of water elements and thought that the shaman should go to help them. However, only Thrall went. 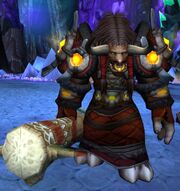 Muln aids the Farseer in Deepholm as the Earthen Ring seeks to gain the Elemental Lords as allies against the Legion, traveling to the Firelands. Muln and the Farseer discover a sect of Twilight cultists working with twilight dragons. Earthfury knew that the twilight dragonflight were extincted near the end of the Cataclysm. But upon entering deeper into the cave, he and the Farseer couldn't believe that they live as a whole again because of the work of the Mistress of Twilight in disguise as a Twilight drake herself.[9][10][11][12][13] Just as Muln feared, they reported this to the Stonemother. He then becomes one the Earthen Ring Champions upon return to the Heart of Azeroth.

When Magatha Grimtotem came to the Heart of Azeroth to ask the Earthen Ring for help, Muln expressed fury towards the Elder Crone for killing his Chieftain. While Muln initially demanded the Farseer of the Earthen Ring to evict her from the Heart, Farseer Nobundo managed to convince him that she could do more damage out in the open as opposed to under the eye of the Earthen Ring. Begrudgingly accepting, Muln spit at Magatha's feet and left.[1]

Muln in the Heart of Azeroth.

This section contains information that needs to be cleaned up. Reason: Convert into quest notes links

Muln Earthfury, a powerful tauren shaman dedicated to keep the elemental forces in check and thus ensure the safety of all the lands Azeroth and the people who live upon them, leads the Earthen Ring. Like many members of the group, Muln frequently roams the land in search of elementals to pacify and cultists to defeat. His current location is unknown, but as dedicated to the group's cause as he is, Muln is undoubtedly carrying out duties important to the Earthen Ring. His long-term goals are unknown.[15]