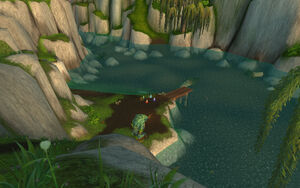 is a shoreline along a small lake just west of Grookin Hill in the Jade Forest. The Forest Hozen use this lake as their fishing ground, but also hunt and eat the snappers here as well.

The following quests take place on the Murky Bank:

At the north-western end of the area is a small grassy area with a large tree. On it can be found a skeleton, the remains of a destroyed boat (including two oars) and what presumably was its cargo. Also sometimes found here is a lootable treasure chest.