For the Outland zone, see Nagrand.

Seafaring ogres claim the south of windswept Nagrand, and they seek to dominate both the land and the orcs who dwell upon it. But more cryptic threats abound: a strange mist pours from the center of the plains, embodiments of nature stir around the Throne of the Elements, and the otherworldly crystals of Oshu’gun draw questers and fortune-seekers from all over Draenor.[1]

"I always looked forward to the Kosh'harg festivals in Nagrand, for it was a time of rare friendship."
—Chieftain Durotan[2]

Nagrand is a zone in western Draenor. It lies west of Talador. It is home to the Burning Blade and Warsong orcish clans, as well as a seat of the ogre empire situated on the continent of Draenor, with Highmaul as its capital.

The Black Market has moved their operations from the Veiled Stair to here, inside the Ring of Blood.

Nagrand — orcish for "Land of Winds" — was formerly the seasonal homeland of the Frostwolf Orcs, and the meeting grounds of the orcish people, where the Kosh'harg celebrations were held twice every year. The clans would assemble at the base of their sacred mountain, Oshu'gun, and give thanks to the spirits.

At some point, the Warsong clan claimed Nagrand as their own territory, but they were faced with occasional ogre raids. One of these raids claimed the life of Golka, Grom Hellscream's mate, which led the chieftain to become filled with regrets, until a certain individual from a different time showed up and convinced the chieftain to rise up against anything that would endanger his people.

Around that time, a brutal slave uprising erupted within the ogre Gorian Empire's capital of Highmaul, which claimed the life of numerous Highmaul citizens and officials, including their emperor, which was decapitated by Kargath Bladefist, who then declared the birth of a clan of his own, the Shattered Hand clan, comprised of liberated slaves, who - like him, severed their own chained hands and proceeded to drown Draenor in ogre blood.

Nowadays, Nagrand serves as the site of Iron Horde's crucial strongholds around Draenor: Grommashar, Lok-rath and Ironfist Harbor to name the few. Also the ogre Gorian Empire still holds much power here, and the magically gifted Imperator Mar'gok rules his people from his seat within the ancient city of Highmaul, although unfavorable political situation forced him to enter an alliance of convenience with the Iron Horde in order to ensure his dwindled empire's safety.


Starting from your outpost in Talador, head west and you will eventually reach a pass which leads into Nagrand.

Continuing the tradition started on the Timeless Isle, Nagrand has a huge number of vignettes, which are one-time events like killing rare mobs, looting treasure chests, or completing scripted events. Nearly all of the vignettes reward 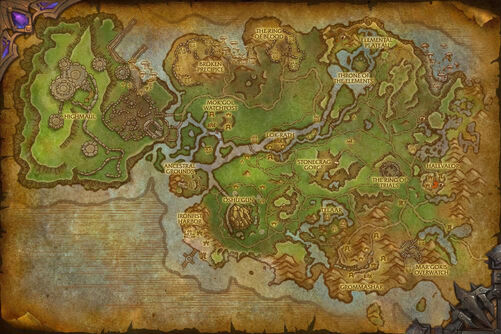