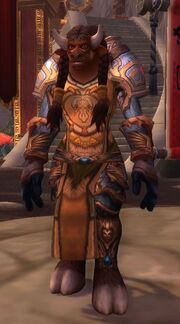 In the Vale of Eternal Blossoms.

Nala is part of the Dawnchaser expedition to Pandaria. She is a midwife, brought to attend to her pregnant cousin Leza Dawnchaser, whose visions brought the group to the continent.

Despite Nala's ministrations, Leza was beset by fever, drained by the negative influence of the sha, and went into premature labor. Leza died during childbirth, but Nala was able to deliver two healthy twin boys.[1] She continued her travel with the expedition tending to the newborns, as seen in Stoneplow while Dezco was fighting against Mantid. The group finally arrived at the Vale of Eternal Blossoms, where she can be found next to the expedition's leader, Sunwalker Dezco, in the Shrine of Two Moons.

After Leza's death, Nala took on the role of caregiver and wet nurse to the twins, accompanying Dezco to the Shrine of Two Moons, where she became fiercely protective of the children. She also assisted Dezco in a ceremony to honor his wife's passing, braiding a lock of Leza's hair into his mane.

When Chi Ji chooses one of the twins to begin a new life with the Golden Lotus, Dezco decides to instead return with his sons to Mulgore, and places Nala in charge of the shrine in his (permanent) absence, considering her a born leader. Although concerned, Nala ultimately accepts Dezco's decision, helping him to prepare for the journey. However, when one of the twins is killed in a mogu attack, Dezco decides to surrender the surviving twin to the Golden Lotus, returning to the shrine and reassuming his position.

After the defilement of the Vale, Nala along with Dezco moved before the Shrine to aid the Golden Lotus Warriors.

Thunder Cleft
Not now. Leza needs all of my attention. She is three weeks early and something is very wrong.

Shrine of Two Moons (old)
We were drawn here by visions of this place. But even the visions pale in comparison to the Vale's beauty.

Shrine of Two Moons (new)
We stand behind Dezco and his choices. We will stand against the mogu, the saurok, the sha, even the warchief of the Horde. We will protect this Vale to the last, if necessary.